- The ongoing rebound in energy prices over the past several months means that Canadian inflation data should have stabilized.

The ongoing rebound in energy prices over the past several months means that Canada inflation data should have stabilized; Crude Oil prices were up another 5.1% in March and were up by 32.5% in Q1’19. As a result, a Bloomberg News survey forecasts thatheadline CPI is due in at 1.9% (y/y), a meaningful increase from 1.5%, and the monthly reading is due in at 0.7% (m/m), as it was in February.

It still holds that improvement in energy markets will help the Canadian Dollar and inflation rebound hand-in-hand. As such, traders should keep expectations low for a policy change from the Bank of Canada any time soon; expectations have moved lower in recent weeks. At the start of April, overnight index swaps were pricing in a 24.3% chance of a 25-bps rate cut by July; now, odds are only 12%. 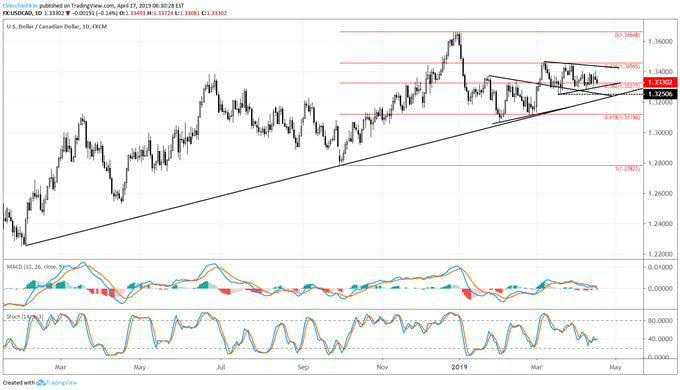 A clear lack of follow through to the topside in USDCAD following the breakout from the early-2019 symmetrical triangle resulted in…another symmetrical triangle. USDCAD price has been consolidating since early-March once more, trading between the 23.6% and 38.2% retracements of the Q4’18 high/low range; the symmetrical triangle from January to early-March consolidated between the 38.2% and 61.8% retracements. If USDCAD price is able to break lower, near-term levels of interest are the April low at 1.3284 and the March low at 1.3251 (concurrently where the rising trendline from the February 2018, October 2018, and March 2019 lows intersects next week). 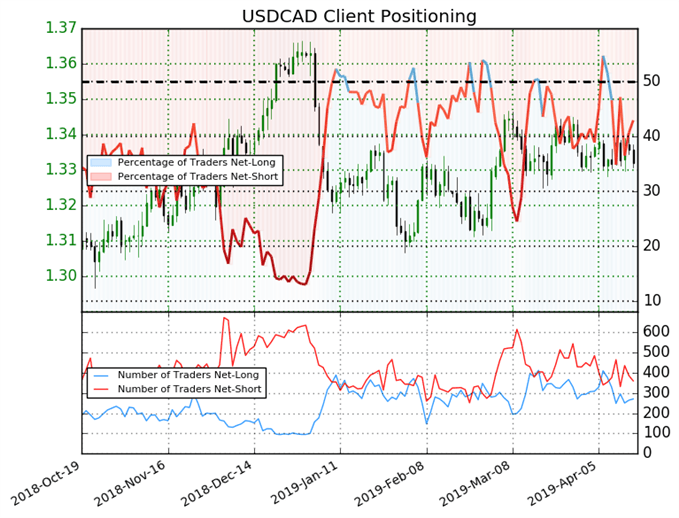