- Rates markets are currently pricing in only a 4% chance of a rate move this coming week, but the odds of a rate cut by the end of the summer are rising.

- Retail traders have flipped to net-long AUDUSD in recent days.

The two big data releases since the last RBA meeting – the Q4’18 GDP report and the February jobs report – both showed signs of a slowing economy. With Australia’s two largest trading partners embroiled in the US-China trade war, there are reasons both at home and abroad for the Reserve Bank of Australia to take on a dovish tone, much like the RBNZ last week. 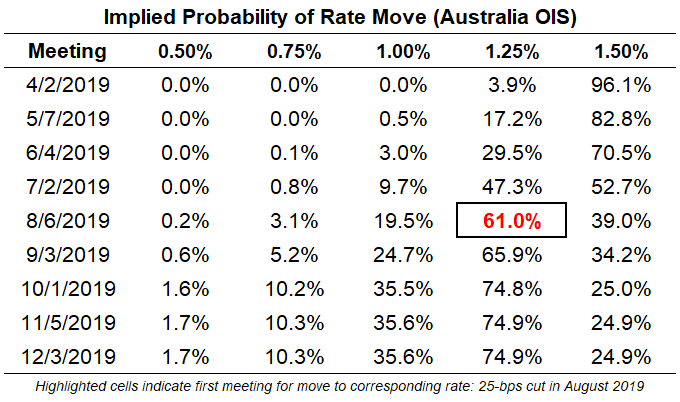 Like its antipodean counterpart last week, odds for a move by the Reserve Bank of Australia at its forthcoming meeting are practically absent: there is only a 3.9% chance of a 25-bps rate cut on Tuesday. Economic data momentum has been stable over the past month, with the Citi Economic Surprise Index for Australia having started March at 2.7 and closing March at 3.9. 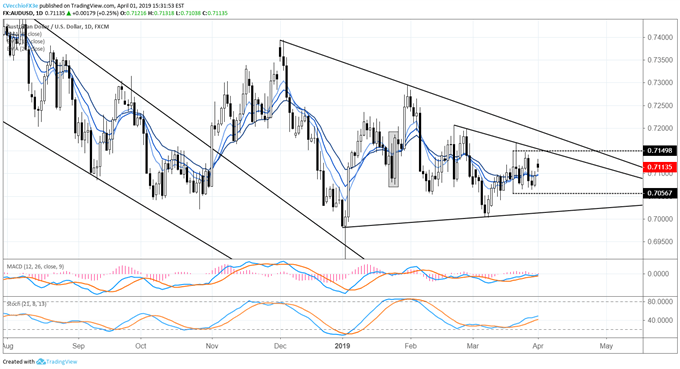 Since establishing a bullish outside engulfing bar on March 20, AUDUSD has made little topside progress. Over the past week-plus, AUDUSD has not seen a close outside of the March 20 high/low range, only but once trading outside of the 0.7057 to 0.7150 range. But the recent range is simply one within a broader consolidation, what appears to be a symmetrical triangle dating back to early-December. Accordingly, a topside break of 0.7150 would run into resistance near the late-February high at 0.7207; a downside break of 0.7057 would might find support near the early-March low at 0.7003.