- Inflation data from across the world will continue to illustrate the impact that the decline in oil prices have had since October 2018.

- Q4’18 Canadian GDP will be lower thanks to the drop in energy prices, and there is a chance that the US government shutdown in December weighed on US growth at the end of the year.

- Even after US President Trump announced an extension to the March tariff deadline, tensions are likely to remain high between China and the US amid key trade and manufacturing data releases this week.

The drop in energy prices since the start of October 2018 is still having its impact felt on the Canadian economy – not much of a surprise considering that roughly 11% of Canadian GDP is derived from the oil sector. Headline CPI is due in at 1.5% (y/y), a sharp decline from 2%, but the monthly reading is due in at a pace of 0.2% from 0.1% (m/m). For now, simple stability in energy markets will help the Canadian Dollar and inflation rebound hand-in-hand. Nevertheless, traders should keep expectations low for a policy change from the Bank of Canada any time soon. Coming into this week, overnight index swaps were only pricing in a 4% of a 25-bps rate hike in the first half of 2019 and a 15% chance of a hike by July 2019.

The US-China trade war may be in the midst of a détente, one whose lifetime was recently extended after US President Donald Trump said that the 25% tariffs on $200 billion of imported Chinese goods would not go into effect on March 2 as planned. But that doesn’t mean that this issue is resolved; upcoming economic data from both China and the United States will show how the trade war has negatively impacted both countries. On Wednesday, delayed US trade figures will show that the US ended 2018 with its largest trade deficit ever, a figure surely to draw the ire of US President Trump and his administration’s trade representatives. On Thursday, the Chinese Manufacturing PMI reading is due to show that the manufacturing sector remained in contraction. The fact of the matter is that US consumers are buying few products from Chinese producers, raising the costs of goods in the US and reducing economic activity in China. Neither side will be happy with the data they see this week.

After a month-long delay due to the December 23 to January 25 US government shutdown, we’ll finally get the initial Q4’18 US GDP report on Thursday. Growth expectations for Q4’18 US GDP have been tempered thanks to the shutdown. The US Congressional Budget Office estimated that the economy lost at least -0.1% of GDP last quarter and -0.2% in Q1’19 as a result of the shutdown. The Atlanta Fed’s GDPNow estimate sees growth due in at a more modest +1.4% from +3.4% in Q3’18 (annualized). According to Bloomberg News, the consensus forecast calls for headline growth due in at +2.3%. 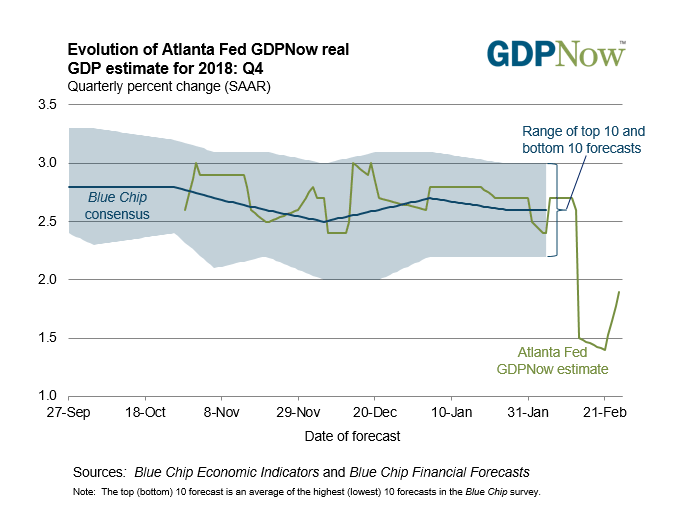 Friday’s February Eurozone CPI report may help provide the European Central Bank the “monetary evidence” required before shifting policy in a more dovish direction. Energy prices have stabilized in recent weeks (Brent Oil +8.9% past month), and a soft trade-weighted Euro (-3.73% since February 22, 2018) has created the near-term conditions for the decline in inflation readings to level off. The upcoming initial February Eurozone Consumer Price Index on Friday should confirm this theory, where headline CPI is due in at 1.5% from 1.4% (y/y) and the Core CPI is due on hold at 1.1%. In line with inflation readings leveling off, Eurozone economic data momentum has started to improve, helping underpin recent stability in the Euro. The February PMI readings were better than expected last week, and now the Citi Economic Surprise Index improved to -64 by February 22, up from -88 on January 25.

The first look at Q4’18 Canadian growth data is expected to show a sharp slowdown relative to the rate of growth seen earlier this year. AsDecember GDP is due in at 1.4% from 1.7% in November (y/y), the annualized reading for Q4’18 is due to show a decrease in the rate of growth to 1% from 2%. The fact of the matter is that the energy sector accounts for nearly 11% of the Canadian economy, and the precipitous drop in energy prices between October 3 and December 24 proved to be a significant burden.