- Another round of US-China trade negotiations are set to take place at the end of this week.

- Gold prices continue to charge higher in an environment marked by heightened political uncertainty in the Eurozone, the UK, and the US.

- Retail traders continue to show doubt over US Dollar strength.

The US Dollar (via the DXY Index) is posting its first gains in three days as investors pin hopes on the US-China trade negotations at the end of this week to provide a breakthrough ahead of the March 2 deadline, while concerns across the pond have increased dollar demand. More weak data out of the Eurozone, this time, the ZEW surveys, underscored the soft growth environment plaguing the world’s largest economic union.

Coupled with commentary from ECB Chief Economist Peter Praet, who said that the ECB could adjust its rate guidance if the growth and inflation outlooks deteriorate further, and the Euro, the largest component of the DXY Index at 57.6%, has seen little reason to continue its rebound from last week’s lows.

Checking in on the Trade War News Cycle

Wash. Rinse. Repeat. The US-China trade negotiations have been on a rinse-and-repeat cycle for the past year – but this has become especially pronounced in recent weeks. When we last checked in, we said that, “We’re back to stage 5, with the new impasse. In the next few days, downtrodden rhetoric from the Trump administration should morph to something more hopeful,” which was ultimately followed by a joint Memorandum of Understanding (MOU) for continued dialogue in the next few weeks.

It seems that global financial markets have been given their latest shot of ‘hopium’ with news that the two sides will meet again at the end of this week. Indeed, the trade war news cycle has evolved rapidly to the point that the news of another summit, this time in Washington, D.C., has already kindled hopes for resolution to the trade war. But with signs that automobile sales are flagging globally, this time may prove different: tangible evidence of the trade war’s collateral damage are simply becoming too difficult to ignore.

Brexit Latest – Running Down the Clock

UK Prime Minister Theresa May may be playing a game of chicken with MPs as she continues to insist that her EU-UK deal is the only way out of the current quagmire. With only 38 days left until the March 29 Brexit deadline, time is indeed running out. The EU is certainly not making anything easier (not that they should have to) by refusing to budge from their current position, although it may be deemed as somewhat comforting that entities from both UK PM May’s government and the EU’s Brexit negotiating team are meeting to trying and smooth over the language in the agreement – reassurances for UK politicians who voted ‘no’ the first attempt to pass it through parliament. 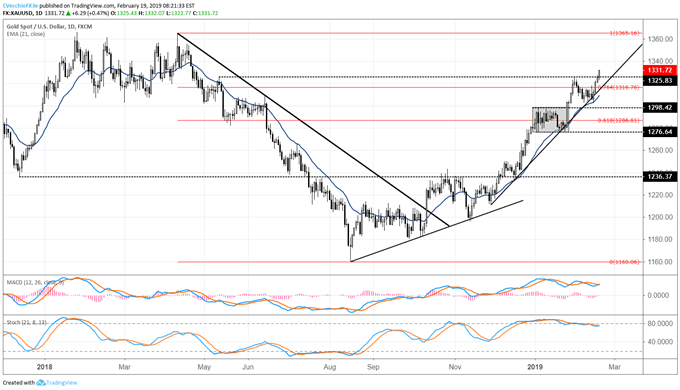 When we last checked in on Gold prices we said that “price action as we make our way through mid-February suggests that recent losses have been corrective in nature rather than an indication of a trend change. For the bull trend to restart, Gold prices will need to clear out Wednesday’s inverted hammer high at 1318.02.” Indeed, with Gold clearing out the February 15 high, prices restarted their uptrend, ultimately pushing to a fresh yearly high today. The high/low range of the consolidation that took in the first two weeks of February had a range of approximately $23, suggesting that Gold’s first upside target is the measured move near 1348. 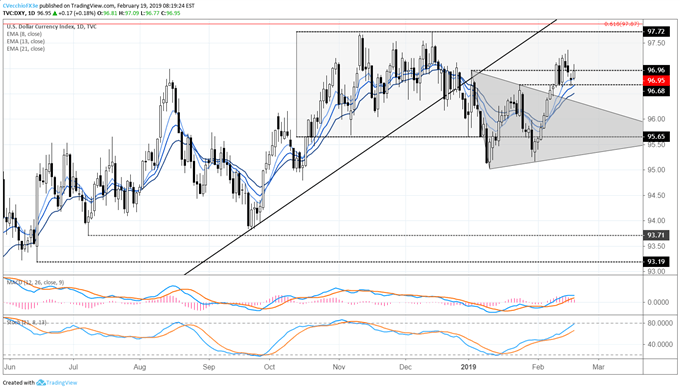 The first gains in three days is helping the DXY Index stave off a close below its daily 8-EMA, in what would be the first close below said moving average since February 4. But there is still sufficient technical evidence for caution, even if the DXY Index’s uptrend is intact for now: the bearish outside engulfing bar from Friday effectively puts a near-term ceiling on price action at 97.37. Only a breach to the topside would reinvigorate the near-term case for the DXY Index to continue the rally outside of the symmetrical triangle, targeting an ultimate return to the November and December 2018 highs near 97.72.