- Some of the most significant data releases and events in any given month are cropped together over the coming days, with a particular concentration of ‘high’ rated data coming between Wednesday and Friday.

- The FOMC meeting on Wednesday will be the first regularly scheduled, non-quarterly meeting to feature a press conference led by the Fed Chair.

Growth expectations for Q4’18 US GDP have been tempered in recent weeks, in large part due to the federal government shutdown. The US Congressional Budget Office estimated that the economy lost at least -0.1% of GDP last quarter and -0.2% in Q1’19 as a result of the shutdown. The Atlanta Fed’s GDPNow estimate sees growth due in at a more modest +2.7% from +3.6% in Q3’18 (annualized). According to Bloomberg News, the consensus forecast calls for headline growth due in at +2.6%. 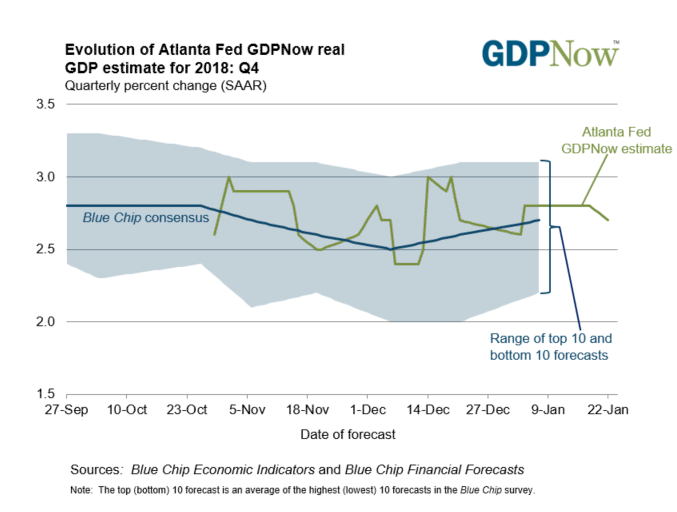 The Federal Reserve has had a bit of a communication problem the past few months, and the January FOMC meeting may be the first effort to clear up any misunderstandings. Starting this week, all FOMC meetings moving forward will feature a press conference by the Fed Chair, whereas previously, press conferences were only held at the quarterly meetings that produced a new Summary of Economic Projections. In theory, this makes the January meeting ‘live.’

In reality, rates markets are pricing in a greater chance of a rate cut than a rate hike at the forthcoming meeting. Amid the US-China trade war’s growing global impact, the crash in energy prices during Q4’18, and more recently, the US government shutdown, it stands to reason that Fed Chair Jerome Powell and the FOMC will be keeping rates on hold for the coming months. To this end, Fed Chair Powell is likely to strike a neutral tone calling for more observation of economic data to suss out the impact of the shutdown before more policy tightening may be deemed appropriate.

The first look at Q4’18 Eurozone GDP should see growth rates continue their decline, with the quarterly rate at a meager +0.2% and the yearly rate down to +1.2% from +1.6% – wholly consistent with the decline in PMI readings in the last few months of 2018. Despite the European Central Bank standing pat at its January policy meeting, the discouraging growth figures should serve to underscore ECB President Mario Draghi’s concern that the outlook for the region is no longer “broadly neutral” and that risks have moved “to the downside.” To this end, he also stated that the ECB needed more “monetary evidence” to embark upon another easing program – data such as another weak GDP reading should be sufficient.

Friday’sJanuary Eurozone CPI report, like the GDP report from the prior day, may help provide cover for the ECB to shift its forward guidance (and therefore, rate hike timing) in a more dovish direction.Even though energy prices have stabilized in recent weeks, inflation expectations remain incredibly depressed: this time last year, the 5-year, 5-year inflation swap forward was at 1.774%; now, it sits at 1.506%.

Accordingly, between the GDP and CPI reports, traders may want to keep expectations around the Euro tempered for the final days of the week. While Core CPI is due in on hold at +1.0% y/y, the headline CPI reading is set to decline to +1.4% from +1.6% y/y. The trend of weakening inflation runs contrary to one of the four criteria the ECB considers when adjusting its ultra-loose monetary policy: “inflation will be durable and stabilize around those levels with sufficient confidence.”

The main issue for the US Dollar when it comes to the January US Nonfarm Payrolls report is whether or not the US labor market was able to stave off the negative impact of the US federal government shutdown. Recall back to October 2013, when the government was shutdown for 13-days: economists estimated that –hiring was slowed immediately by at least 50K jobs, although the labor market was able to recover fully in the months thereafter.

Accordingly, this fly in the ointment will make its way to the January 2019 jobs report. To this end, Bloomberg News’ consensus forecast is estimating that the economy added +165K jobs and the unemployment rate was on hold at 3.9%. As a point of reference, the standard deviation of estimates for the past two NFPs were 15.8K and 14.8K, respectively; for the January NFP, the standard deviation is 38K. A wider dispersion of estimates is a clear sign that market participants unsure of how the data will actually arrive.

According to the Atlanta Fed Jobs Growth Calculator, the economy only needs +111K jobs growth per month over the next 12-months in order to sustain said unemployment rate at its current 3.9% level.