- The key Brexit vote on Tuesday could very well set the UK back on the path towards a general election, as well as unwinding the decision to Brexit altogether.

- Significant US economic data won’t be released this week as the US government shutdown has shuttered the doors at the Bureau of Economic Analysis and the Census Bureau.

- Inflation data from Canada, Japan, and the UK will all show that the decline in energy prices since the start of October 2018 is continuing to filter through and weigh on price pressures – a factor that could hold back central banks from tightening policy during early-2019.

Recall in early-December 2018 that the British Pound was tumbling on news that UK PM Theresa May’s EU-UK Brexit deal vote was postponed amid concern that there wasn’t enough support for it to pass; now, it seems that the same set of factors – the vote will fail – is a bullish catalyst for the British Pound. Instead of markets taking the projected failed vote as a sign that the UK is careening towards a no-deal ‘hard Brexit’ outcome, traders have instead taken up the belief that rejection on Tuesday will mean that Brexit will be avoided altogether.

Ultimately, it’s possible that UK government revokes Article 50 and proceeds with a second referendum. A no-deal Brexit – or no Brexit at all, after a second referendum – is very possible. If that’s the case – the parliamentary vote is merely paving the path towards unwinding everything since the June 2016 Brexit vote – that doesn’t mean that the British Pound is out of the water just yet. It’s almost certain that the country could move for another general election should the Tory government fail under Theresa May, and the prospect of Labour party leader Jeremy Corbyn coming to power may not be seen as appealing by financial markets. Needless to say, politics will continue to be the prevailing factor for the British Pound for the foreseeable future – expect two-way volatility to remain elevated.

Stability in the British Pound over the past month may have taken away the cushion that a weakening Sterling provided to inflationary pressures. Indeed, after the sharp decline in energy prices since the start of October 2018, inflation readings in developed economies continue to show signs of disinflation;the upcoming December UK CPI report is due to show. Headline inflation is due in at +2.1% from +2.3% (y/y), while the monthly reading is due steady at +0.2%. Core CPI is expected to have stayed on hold at +1.8% (y/y).

Putting these data into context, in September 2018, the Bank of England’s Monetary Policy Committee essentially announced it would not move on rates until after the Brexit deadline had passed (March 2019), meaning the weight of policy-sensitive data has less of an impact in the near-term; Brexit developments are far more important. That said, signs that inflation is moderating should be neither a positive or negative catalyst for the British Pound, especially as both core and headline inflation remain between +2-3%. Meanwhile, rates markets aren’t pricing in at least a 50% chance of a 25-bps rate hike until August 2019 (when the BOE has a Quarterly Inflation Report (QIR) set to be released).

01/16 Wednesday | --:-- GMT | US Economic Data Releases Due to be Canceled Due to Federal Government Shutdown: Advance Trade Balance (NOV) and Retail Sales (DEC)

The US federal government shutdown has moved into its fourth week, in the process becoming the longest shutdown in US history, surpassing the 21-day shutdown of 1995-96. Now, like then, a party opposite the president controls at least one chamber of Congress, meaning bipartisan resolution is the only way to resolve the current impasse. Meanwhile, US President Trump’s tweets over the weekend and early-Monday would seem to suggest that he remains dug-in over the border wall and the US government shutdown. Equally so, Democratic leaders in Congress don’t appear ready to budge either; gridlock is back in Washington, D.C. Accordingly, US economic data will be sparse this week. Two more ‘high’ rated casualties: the trade balance (already delayed from last week); and retail sales (perhaps the most important month-to-month data release pertaining to consumption trends in the US). 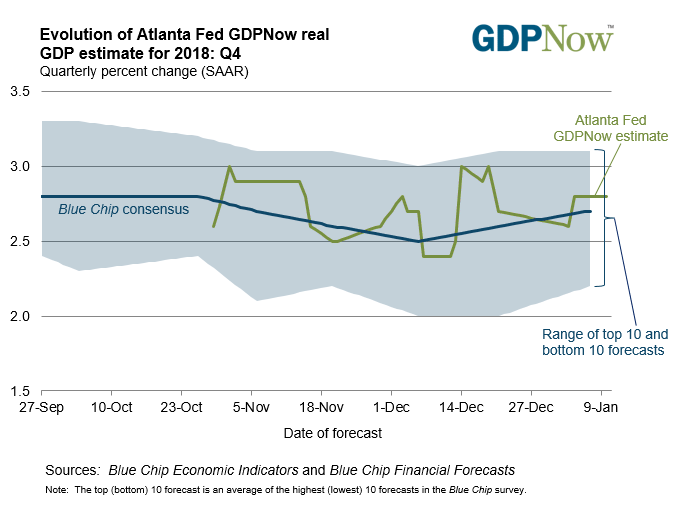 Based on the data received thus far about Q4’18, the Atlanta Fed GDPNow forecast is looking for growth at +2.8%. The next update to the Q4’18 forecast was scheduled to be released after Wednesday’s US economic data, but likely will not be released on the same schedule.

Japanese inflation figures are set to turn lower, a sign that policymakers’ best intentions can fall flat in the face of strong exogenous forces. In this case, the downturn in energy prices since the start of October 2018 has had a deleterious effect on Japan – a country that has imported more than 90% of its energy needs in recent years. It should be no surprise then, that when energy prices crater, so too do imported inflationary pressures. The headline reading is due in at +0.3% in December, down from +0.8% (y/y), while the core reading – ex-fresh food – is due in at +0.8% from +0.9% (y/y). The core-core reading – ex-fresh food & energy – is due in at +0.3% from +0.3%(y/y). Traders shouldn’t draw any long-term implications from the print, however; the Bank of Japan isn’t going to be changing policy any time soon.

For an economy that’s growth is largely dependent on energy markets – roughly 11% of Canadian GDP is derived from the oil sector – the drop in energy prices since the start of October 2018 will have an obvious impact. But traders know this, and in turn, priced in a weaker Canadian Dollar along the way; the Loonie’s lowest point in Q4’18 was hit on October 1, 2018, the first day of the quarter, while its high point was December 31, 2018, the last day of the quarter.

The resulting impact of the ongoing depreciation by the Canadian Dollar during Q4’18 helped cushion inflation from the impact of declining oil prices. Headline CPI is due in at +1.7% (y/y), the same pace as in November, while the monthly reading is due to decline at a pace of -0.4% (m/m), as it was in November as well. For now, simple stability in energy markets will help the Canadian Dollar and inflation rebound hand-in-hand; otherwise, don’t expect the Bank of Canada to move on rates any time soon. Entering the week, overnight index swaps were only pricing in a 25% of a 25-bps rate hike in the first half of 2019.

Read more: DXY Index Hangs on by a Thread, Pound Rallies ahead of Key Brexit Vote