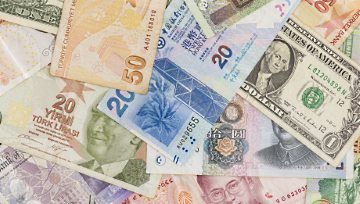 - Inflation data from Canada and the UK are due out on Wednesday, and the path of future rate hikes may be at stake if the decline in energy prices begins to undermine price pressures.

- The US federal government appears to be headed towards a shutdown at the end of the week after a contentious meeting between US President Trump and Democratic Congressional leadership.

UK economic data has gone under the wire in recent weeks as the rollercoaster Brexit negotiations have been a black hole for attention. Yet in the days ahead of the December Bank of England policy meeting, traders will be paying attention to the November inflation report due out on Tuesday. Headline inflation is due in at +2.3% from +2.4% (y/y), and the monthly reading is due in at +0.2% from +0.1% (m/m). Core CPI is expected to have dippedto +1.8% from +1.9% (y/y).

Evidence that inflation is moderating should be neither a positive or negative catalyst for the British Pound, especially as both core and headline inflation remain between +2 and +3%. While there is no immediate implication on BOE policy, the fact of the matter is that the BOE has been sidelined for some time now amid the Brexit negotiations, and is quickly approaching the event horizon when which it will have to start making its monetary policy data dependent again (Q2’19).

The sharp decline in energy prices since the start of October will make itself apparent in the upcoming round of November Canadian inflation. Canadian economic activity is sensitive to shifts in oil prices, given that approximately 10% of GDP is derived from oil-related activity. As such, headline CPI is due in at +1.8% from +2.4% (y/y), a stark decline underscored by the expected month-over-month reading of -0.4% from +0.3% previously.

If the data meet expectations, this will be the first time that inflation has been in the lower half of the Bank of Canada’s inflation target range. Accordingly, scope for recovery for the Canadian Dollar remains low, particularly as long as near-term rate expectations remain depressed: overnight index swaps are pricing in a 9% chance of a 25-bps rate in January 2019 and a 38% chance of a hike in March 2019.

Following speeches by Fed Vice Chair Richard Clarida and Chair Jerome Powell in early-December, as well as the release of the November FOMC meeting minutes, expectations have started to build that the FOMC will slow down its pace of rate hikes moving forward.

Accordingly, attention will be on the updated Summary of Economic Projections, where it seems very likely that: (1) 2018 and 2019 growth forecasts could be downgraded, in part due to growing trade war concerns; (2) 2018 and 2019 inflation forecasts could be downgraded, largely due to movement in the US Dollar and energy markets; and finally (3) the glide path for future rate hikes is reassessed, suggesting a slightly slower pace moving forward.

At the September FOMC meeting, policymakers outlined a path of one more 25-bps hike in 2018, three hikes in 2019, and one hike in 2020. However, ahead of the December policy meeting, rates markets are pricing in one more 25-bps hike in 2018, one hike in 2019, and a rate cut in 2020. For the US Dollar to rally, the Fed will need to prove resilient to recent developments, thereby suggesting markets are underpricing the risk of future hikes. Otherwise, the base case scenario of a ‘dovish hike’ doesn’t seem ready to help the US Dollar rise any further.

Continuing its three-decade battle with deflationary pressures, the Bank of Japan has yet to find success with getting topline inflation readings back to its medium-term target of +2%; the November National Japanese CPI report due out at the end of the week is expected in at +0.8% from +1.4% (y/y). After the decline in energy prices since the start of October, disinflation is likely to persist in the near-term; per the most recently made available data from 2013, Japan imports 96% of the energy it uses.

Add in the fact that Japanese economic data has been disappointing for more than three months now: the Citi Economic Surprise Index for Japan has been in negative territory since September 25. Even though the Bank of Japan isn’t dealing with exogenous factors like its other two contemporaries this week – the Federal Reserve grappling with the impact of the US-China trade war, the Bank of England hamstrung by Brexit – it’s still going nowhere fast with its monetary policy. The resulting impact on the Japanese Yen should be minimal.

The Bank of England remains sidelined amid the rollercoaster that is the Brexit negotiations. By its own accord, the BOE pledged to keep policy on hold in the immediate run-up to the March 2019 Brexit deadline, and as a result, speculation around BOE policy has withered for the past several months. Similarly, because of the policy paralysis, economic data – like the November inflation report due out earlier in the week – have seen reduced influence over FX markets.

Accordingly, given the fact the December BOE policy meeting will not produce a new Quarterly Inflation Report and thus new economic forecasts, we expect the resulting impact to the British Pound to be minimal. Overnight index swaps are pricing in a 50% chance of a 25-bps rate hike by August 2019.