FX Week Ahead: BOC on Wednesday, ECB on Thursday, Q4’18 US GDP on Friday

- The Bank of Canada and the European Central Bank will meet next week, the former of which will hike rates by 25-bps and the latter which will do nothing.

The Canadian Dollar heads into the week of the October Bank of Canada rate decision near six-week lows after the release of the September Consumer Price Index and Retail Sales reports. Canadian inflation figures came in much weaker than anticipated for last month, registering +2.2% versus +2.7% expected (y/y) on the headline. Moreover, the September consumption print came in far below expectations as well, contracting in fact. Curiously, October Bank of Canada meeting rate hike odds are up from 78% to 92% today after the data, which leads to the conclusion that the hike is very much priced-in.

In turn, USD/CAD may have some fuel left in the tank to run higher as it's now difficult to foresee the BOC increasing its hawkish rhetoric after the September CPI and retail sales reports. The absence of forward guidance could undercut the Canadian Dollar; USD/CAD may soon be challenging the descending trendline from the highs in June and September near 1.3125.

Despite the fact that the October European Central Bank policy meeting won’t produe new Staff Economic Projections, and therefore, expectations for any change in policy are extremely low (like the Federal Reserve (with its Summary of Economic Projections) or the Bank of England (with its Quarterly Inflation Report), the ECB has a multi-year track record of only making significant policy shifts at meetings when it has new economic forecasts in hand).

Similarly, since the meeting in June, the Governing Council effectively has policy on a preset course through at least next June when President Draghi announced the schedule for winding down QE in December 2018 and hiking rates sometime around the “summer 2019.” But European bond markets have been hurting recently, with contagion spreading from Italy to Spain in recent days; both countries’ sovereign bond yields are at multi-year highs, and their spreads versus Germany are widening out at a quick pace.

Such an environment – one marked by continued tensions between Rome and Brussels over the Italian budget, as well as lingering concerns about the Turkish Lira’s depreciation impact on European banks – leaves open the possibility that, if ECB President Mario Draghi is to change tact at all, the shift would be in a more dovish direction. Accordingly, the appropriate outlook heading into the meeting for EUR/USD is neutral, with an eye for downside opportunities.

Trade balance figures typically go unnoticed most of the time by most market participants, but the data have started to garner more attention in recent months as US President Trump has escalated his trade war rhetoric. Now that the NAFTA/USMCA negotiations have wrapped up, traders should expect US President Trump to use the trade balance release as a platform to further escalate his rhetoric in the US-China trade war – something that has happened the past few releases. We care more about what US President Trump has to say in response to the figures more than the actual September US Advanced Goods Trade Balance itself (which should see the trade deficit widen out to fresh records).

Durable Goods Orders are an important barometer for US consumption, which constitutes roughly 70% of GDP. Typically, consumers hold off on buying durable goods during poor economy conditions; thus, improved orders suggest confidence among American consumers with respect to their future financial security. The preliminary September print is expected to show a drop of -1.5% over the prior month after the +4.4% increase in August. The data won’t likely help US growth (and thus, the US Dollar) expectations for Q3’18, which (despite still being very strong) have cooled off in recent weeks; the Q3’18 Atlanta Fed’s GDPNow estimate is at +3.9% now, down from +5% over the summer.

Growth expectations for Q3’18 US GDP are strong, no matter where you look. The New York Fed’s Nowcasting report sees growth coming in at +2.7% while the Atlanta Fed’s GDPNow estimate sees growth due in at a very strong +3.9%. According to Bloomberg News, the consensus forecast calls for headline growth due in at +3.3%. It’s worth noting that both the Atlanta and New York Fed estimates underperformed the actual Q2’18 readings (as well as the subsequent revisions). It’s very possible that growth tops +4% annualized once more, which may help fuel concerns about an aggressive Fed rate hike path moving forward (revisiting fears from earlier in the month about rising US Treasury bond yields). 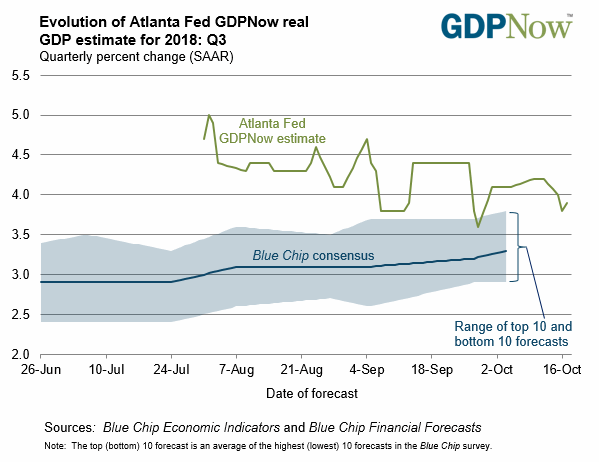