- As concerns crop up about the state of the US economy and whether or not the Federal Reserve may be tightening policy too quickly, upcoming retail sales figures and September FOMC meeting minutes will generate volatility across USD-pairs on Monday and Wednesday, respectively.

- Rising interest rates have sparked weakness in equity markets across the globe this week, and more signs that inflation is heating up could reignite another wave of higher yields in developed economies.

- Retail traders remain mostly net-short the US Dollar, which suggests a further rebound in the coming days.

Consumption is the most important part of the US economy, generating nearly 70% of the headline GDP figure. The best monthly insight we have into consumption trends in the US might arguably be the Advance Retail Sales report. In September, according to a Bloomberg News survey, consumption slumped with the headline Advance Retail Sales due in at +0.6% from +0.1% (m/m). Conversely, the Retail Sales Control Group, the input used to calculate GDP, is due in at +0.4% from +0.1% (m/m). Given the backdrop of events otherwise, we don’t expect the retail sales report to have a significant impact, at least this time around. 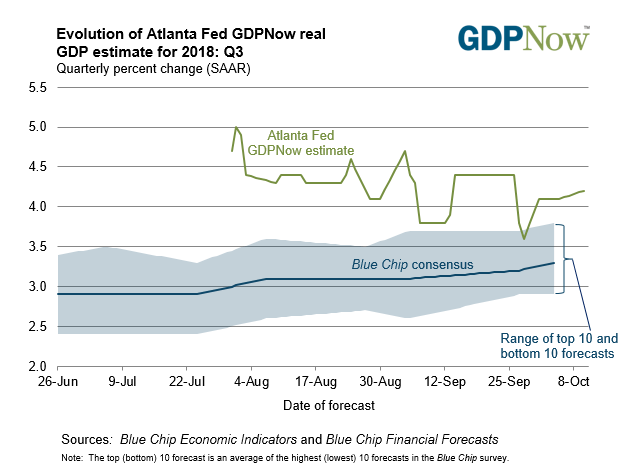 Based on the data received thus far about Q3’18, the Atlanta Fed GDPNow forecast is looking for growth at +4.2%. The next update to the Q3’18 forecast will be released after Monday’s US economic data.

Q3’18 New Zealand inflation figures are due to push higher again, lifted by the base effect from higher oil prices and a weaker trade-weighted New Zealand Dollar during the quarter. The quarterly reading is due in at +0.7% from +0.4% and the yearly reading is due in at +1.7% from +1.5%. Accordingly, inflation is due to remain below the RBNZ’s medium-term target of +2%,leaving little opportunity for 2018 rate hike expectations to rebound in a meaningful way. Currently, rates markets are not pricing in any RBNZ policy tightening over the next six months; instead, there is a 15% chance of a 25-bps rate cut by March 2019. At a minimum, the RBNZ should carry a slightly dovish tone in its policy statement, offering little help to the New Zealand Dollar.

Resiliency in the British Pound in 2018 may be still helping UK inflation get tamed, as the upcoming September CPI report is due to show. Headline inflation is due in at +2.6% from +2.7% (y/y), a moderation to +0.2% from +0.7% (m/m). Core CPI is expected to have stayed on hold at +2.0% from +2.1% (y/y). In September, the Bank of England’s Monetary Policy Committee essentially announced it would not move on rates until after the Brexit deadline had passed (March 2019), meaning the weight of policy-sensitive data has less of an impact in the near-term; Brexit developments are far more important. That said, signs that inflation is moderating should be neither a positive or negative catalyst for the British Pound, especially as both core and headline inflation remain between +2-3%.

The Federal Reserve’s September policy meeting delivered a 25-bps rate hike as well as a new Summary of Economic Projections, neither of which produced much of a surprise to anyone. The median dot plot continues to price in one more 25-bps rate hike in 2018 (December); this outlook was maintained in the June, July, and now September policy statements. Accordingly, the September meeting minutes will be parsed to see where Fed officials see rates going in 2019. Recent conversation about the ‘natural rate’ has boiled down to the notion that there may be more rate hikes left in the cycle, meaning rates will go higher than previously expected.

Japanese inflation figures may edgehigher again, due in at +1.0% unch in September, while the core reading – ex-fresh food – is due in at +1.0% from +0.9% y/y. The core-core reading – ex-fresh food & energy – is due in at +0.4% unch y/y. After rebounding for the past six months, price pressures seem to be moderating. If anything, they’ll reveal how much of an impact the rise in oil prices has had this year (and a harbinger of what may impact global growth more significantly moving forward). Traders shouldn’t draw any long-term implications from the print, however; the Bank of Japan isn’t going to be changing policy any time soon.