- The Turkish Lira selloff and its knock-on effects to other currencies (the Euro and the South African Rand come to mind) will garner the most attention over the coming days.

- There are two 'high' rated US data releases this week, but the only one that's worth paying attention to is the July US Advance Retail Sales report on Wednesday.

According to a report released by the Financial Times on Friday, the ECB’s supervisory wing, the Single Supervisory Mechanism, had been in the process of reviewing European banks’ exposure to Turkey following the sharp depreciation seen in the Turkish Lira in recent months.

ECB regulators have begun to express concern that Turkish borrowers are improperly hedged against Lira weakness, and may begin to default on their foreign currency loans – meaning European banks’ balance sheets could be coming back under pressure. Per the Bank of International Settlements, Turkish borrowers owe Spanish banks $83.3 billion, French banks $38.4 billion, and Italian banks $17 billion; European banks are owed $194 billion in total by Turkish borrowers.

What was previously seen as an expected period of monetary policy being on autopilot, now is riddled with questions about whether or not the European Central Bank will even have the ability to withdraw its monetary stimulus on its current projected timeline (reminder: end QE in December 2018; raise rates in “summer 2019”).

According to Bloomberg News, consensus forecasts are calling to see inflation having held steady month-over-month but having increased by +2.5% from +2.4% (y/y). Core CPI is expected to have stayed on hold at +1.9% unch (y/y). Following the Bank of England meeting earlier this month, where the Monetary Policy Committee essentially announced it would not move on rates until after the Brexit deadline had passed, the British Pound has been under constant pressure thanks to eroding rate expectations. While a singular inflation report doesn’t have the clout to provoke a complete turnaround in GBP-crosses, a hotter report will at least help stem the further erosion of the rate term structure.

Consumption is the most important part of the US economy, generating nearly 70% of the headline GDP figure. The best monthly insight we have into consumption trends in the US might arguably be the Advance Retail Sales report. In July, according to a Bloomberg News survey, consumption slumped with the headline Advance Retail Sales due in at +0.1% from +0.5% (m/m). Conversely, the Retail Sales Control Group, the input used to calculate GDP, is due in at +0.4% from 0.0% (m/m). Given the backdrop of events otherwise, we don’t expect the retail sales report to have a significant impact, at least this time around. 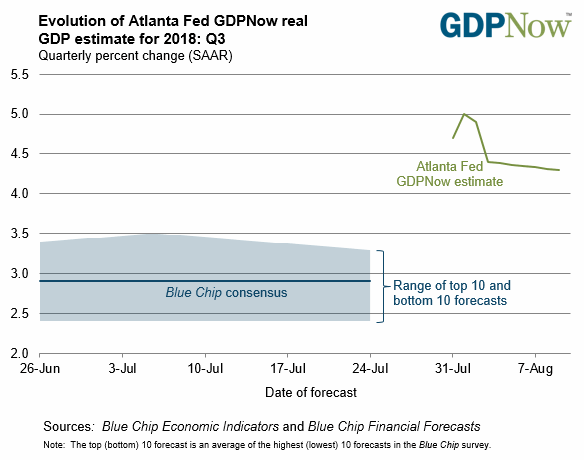 Based on the data received thus far about Q3’18, the Atlanta Fed GDPNow forecast is looking for growth at +4.3%. The next update to the Q3’18 forecast will be released after Wednesday’s US economic data.

Australian employment increased by +50.9K in June, and despite labor market data proving stronger in recent months, focus remains elsewhere for traders (mainly, pressure on emerging markets and associated currencies). With the unemployment rate set to hold at 5.4%, the Reserve Bank of Australia is simply looking for more evidence that the labor market remains a source of stability, even if wage growth continues to lag expectations.

Nevertheless, despite the steadily improving state of the labor market, uneven economic data appears to be a wrinkle in the outlook for the RBA, which continues to note that real wage growth trends aren’t strong enough to provoke a rate hike any time soon. Currently, rates markets are only pricing an insignificant 0.6% chance of a rate hike at their next meeting in September and an 8% chance by December.

Canadian inflation is expected to hold above the central bank’s medium-term midpoint target of +2.0% in July, set to hold at +2.5% (y/y), the sixth month in a row where inflation has been in the upper half of the inflation target range. Despite recent improvements in the labor market, figures from Statistics Canada showed that overall wage growth is barely off of its lowest levels since 1990. With both inflation and labor market data trending in the right direction, odds have turned higher for the Bank of Canada to raise rates again at least once more this year: overnight index swaps are pricing in a 78% chance of a 25-bps rate hike by December.