- The first half of the week features March US Retail Sales, Q1’18 Chinese GDP, March UK CPI, and the Bank of Canada rate decision.

- Retail trader positioning has little consistency in bias across USD-pairs. 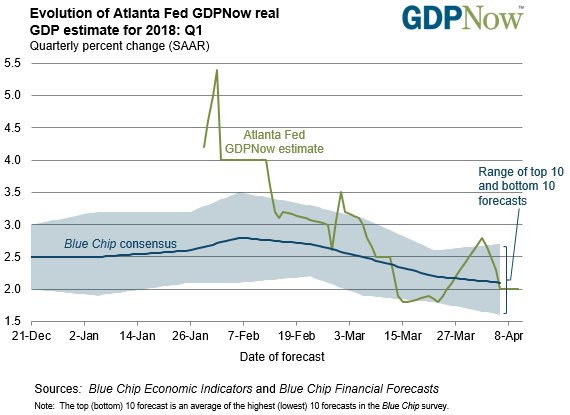 Based on the data received thus far about Q1’18, the Atlanta Fed GDPNow forecast is looking for growth at +2%. The next update to the Q1’18 forecast will be released after Monday’s US economic data.

Consensus forecasts, according to Bloomberg News, are calling to see inflation having increased by +0.3% from +0.4% (m/m) and at +2.5% unch (y/y). Likewise, Core CPI is expected to have increased to +2.5% from +2.4% (y/y). Given that inflation will remain at high levels as real disposable income remains under pressure, the Tuesday report should give plenty of room for the BOE to maintain its willingness to raises rates again soon; overnight index swaps are currently pricing in greater than an 85% chance of a 25-bps hike by May. The British Pound should remain supported assuming inflation rates remain elevated..

The Bank of Canada will leave its main interest rate on hold at 1.25% when it meets this Wednesday, according to economists surveyed by Bloomberg News. While Canadian economic data has been steady – notably inflation and labor market reports that would point to a more hawkish BOC – the overhand of the NAFTA negotiations has unleashed uncertainty over the near-term horizon. Despite seeing odds near 80% at the beginning of February for another 25-bps rate hike in the first half of 2018, rates markets are now pricing in less than a 30% chance of a rate move by the BOC’s May meeting. The BOC will likely wait until the NAFTA negotiations have concluded before moving on rates again.

Australian employment increased by +17.5K in February, and despite labor market data proving stronger in recent months, focus remains elsewhere for traders. With the unemployment rate due to decline 5.5% from 5.6%, the Reserve Bank of Australia is probably looking for nothing more than signs of stable growth rather than another blowout print to keep their optimism about the labor market intact. Current forecasts call for +20K jobs to have been added last month, in what should amount to another strong labor report overall.

But despite the steadily improving state of the labor market, uneven economic data appears to be a wrinkle in the outlook for the RBA, which continues to note that real wage growth trends aren’t strong enough to provoke a rate hike any time soon. Interest rate expectations (per overnight index swaps) show that no rate move is expected in 2018.

Japanese inflation figures are expected to fall back after several months of pushing higher, due in at +1.1% in March from +1.5% in February (y/y). The previous reading was the fastest rate of price pressures since April 2015 – when Shinzo Abe government enacted the (unpopular) sales tax reform. Accordingly, a retracement in inflation should cool market participants’ speculation over an early termination to the BOJ’s easing policies; the BOJ has recently signaled that the end of the extraordinary easing measures will come around the start of FY2019 – next April.

Read more: No Range Break in Sight Yet for EUR/USD