- BOJ meets, unlikely to change policy; in fact, BOJ will be happy with recent developments.

- Inflation and growth data from Canadian important as BOC takes on dovish tone in recent weeks.

- US consumption data may come in flat after a surge last month; markets looking to see if confidence bump after US elections translates into action.

The Bank of Japan is widely expected to keep rates on hold when it meets on Tuesday, staying in its holding pattern since the September policy shift. At that meeting, the BOJ introduced its yield-control framework with the intent of keeping the JGB 10-year yield pegged at or below 0%. With policy officials pleased with how the new yield cap is working – keeping the appeal of the Yen reduced in a rising rate environment - it’s unlikely that any adjustments will be made. For BOJ policy officials, recently developments such as the rebound in energy prices around the OPEC/non-OPEC supply cuts and ongoing weakness in the Japanese Yen will be seen as welcomed signs for better CPI data over the coming months.

New Zealand's economy expanded +3.6% year-on-year in Q2’16, following an upwardly revised +3% growth in the previous period. The last quarter saw the strongest growth since Q4’14. On a quarter-on-quarter basis, analysts are expecting growth of +0.8% compared to a prior quarter’s +0.9%.

Strong housing activity and Kiwi consumer spending helped drive economic growth in the second quarter, according to Statistics NZ. “We saw greater housing-related activity this quarter. Household spending was up 1.9%, its biggest rise since 2009. Record numbers of houses were sold, construction figures were up, and activity increased for manufacturers of products used mainly in the construction sector,” national accounts senior manager Gary Dunnet said. And strong housing activity in New Zealand continues with the latest building permits consented passing 30,000 for the first time in 11 years.

Durable Goods Orders are an important barometer for US consumption, which constitutes roughly 70% of GDP. Typically, consumers hold off on buying durable goods during poor economy conditions; thus, improved orders suggest confidence among American consumers with respect to their future financial security.

The preliminary November print is expected to show a decline of -4.6% over the prior month. In context of strong consumption trends in recent months and the jump in business and consumer confidence after the US Presidential elections in November, the forthcoming figure may be a touch disappointing. Given the expectation for a steep drop – not atypical to see Durable Goods oscillate violently throughout the year – a small beat could prove reaffirming for the greenback.

Is the global inflation cycle turning? Yields across developed economies would suggest so.In Canada, however, perhaps not quite yet. Previously coming in at +0.2% (m/m) in October, the price level in November is expected to retreat yet again, by -0.2%(m/m). On a yearly-basis, this will translate into the CPI receding to a rate of +1.4% from +1.5%. Weakness in Canadian prices may be overlooked, however, as energy prices turn higher, providing optimism for a stronger rebound in Canadian growth prospects. Given how weak the Canadian Dollar and energy prices were in Q4’15 and Q1’16, there may be a tailwind base effect coming into play over the coming months that could see Canadian CPI push higher early next year. 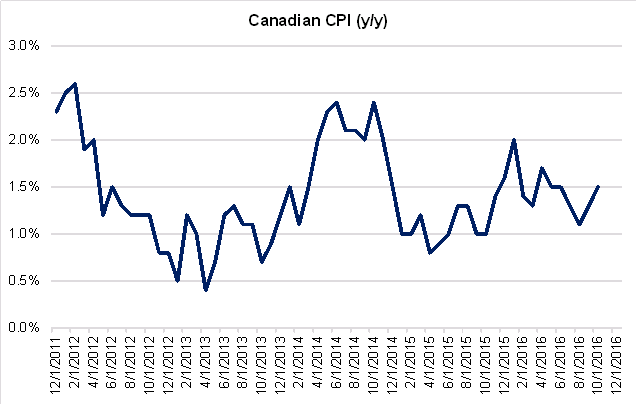 The Bank of Canada has forecast a +1.1% growth rate for 2016, but analysts think that may be too dovish in the near-term. Previously at +1.9% y/y, the annual growth rate is expected to slow in October to +1.8%, as just recently stable oil prices were not fully mitigated by a weaker Canadian dollar, nor did they parlay into greater spending on behalf of consumers. Recently rising yields around the world have translated into tighter financial conditions in Canada, and according to BOC Governor Poloz, the BOC has “plenty of ability to adopt and independent monetary policy” and will loosen policy further to meet its inflation target if necessary. 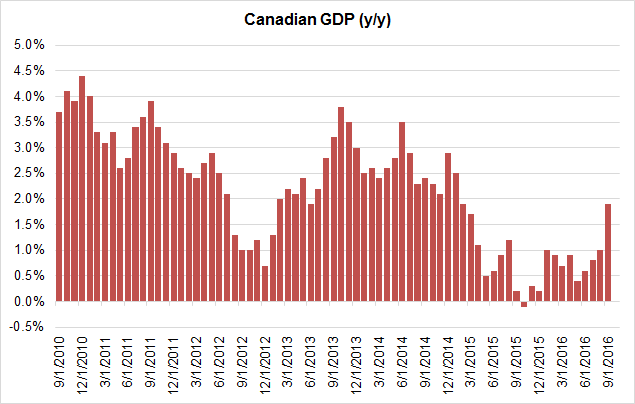