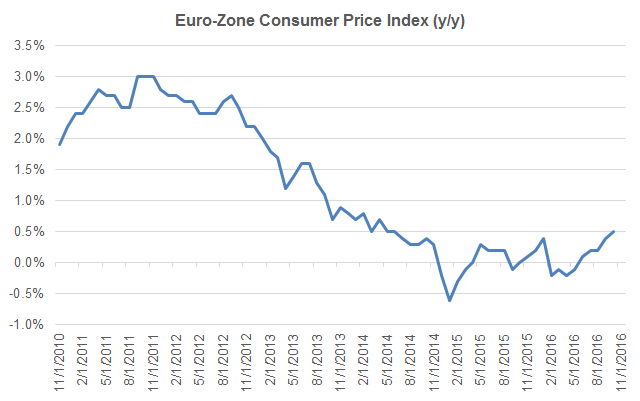 FX Markets Set for Volatility as Political Risk Increases; US NFPs on Friday

- Transition into first week of a new month means economic calendar will be saturated with significant data throughout the week.

- Wednesday the most significant day for event risk: 10 of the week’s 19 events/data rated ‘high’ are due in the middle of the week.

Markets are quickly returning to normal liquidity conditions after last week’s holiday-disrupted trade. Traders won’t have much time to get their bearings as the economic calendar ratchets up with significant event risk in the early part of the week, reach its crescendo with the November US Nonfarm Payrolls report on Friday – the last labor market report due out before the Federal Reserve meets for its final policy meeting of 2016 on December 14.

Before then, Europe rightly deserves attention, having just passed through the French Republican primaries and now waiting on the Italian constitutional referendum on Sunday, December 4 (we’re don’t believe it will pass). European Central Bank President Mario Draghi is speaking several times this week, and similarly, we’ll have the November CPI readings for Germany and the Euro-Zone; these in sum will help further guide expectations for the ECB’s last meeting of the year on December 8 (since September, we’ve forecast the ECB to change their QE program at the December meeting).

A twice-yearly report from the Financial Policy Committee (FPC) on the current strength and weaknesses of the UK financial system is due out on the last day of November. The report also provides a forward-looking outlook and a backward-looking review of the FPC’s actions over the previous reporting period and highlights the effectiveness of its actions, which will be noteworthy considering the reporting period covers the immediate actions after the June 23 Brexit vote.

The previous report, released on July 5 2016, covered the initial reaction to the UK’s decision to leave the European Union, when GBP/USD dropped sharply from around 1.5000 to 1.3300. The prevailing talk from the FPC was that the country would quickly see growth flatten out ahead of a sharp recession. Since then, data has picked up from its post-Brexit lows, mainly due to the positive effects of a weaker pound, although imported inflation is now very much in policymakers’ thoughts.

Looking forward, the FPC will likely note that while financial markets have stabilized, with Article 50 to be triggered by the end of March, domestic and global uncertainty lies ahead. The UK’s widening current account deficit will also be closely monitored. CA deficits necessitate a weaker currency to offset, which in the Pound’s case could cause an additional headache given the inflation ramifications.

The Euro-Zone’s preliminary November CPI figures will be published Wednesday and may play a role in deciding the European Central Bank’s policy ahead of its next meeting on December 8. In October, final Euro-Zone CPI gained +0.5%, up from +0.4% in the prior month (y/y). This was above analysts’ forecast of +0.4% and was the strongest gain since June 2014. The core inflation reading settled in at +0.8% (y/y). Similarly, recent PMI data which pointed to stronger growth in Europe and rising inflation pressures.

Analysts expect the Core inflation reading on Wednesday to stay at +0.8%. The headline rate is forecast to increase slightly from +0.5% to +0.6% (m/m). Concerns are growing that the central bank’s aim of stimulating the real economy isn’t working, despite more evidence of inflation rising above expectations in the Euro area. Ultimately, while important on a longer-term basis, the November CPI may not impact the ECB’s decision, however, to extend its €1.74 trillion bond-buying program beyond March, which would be done for more-or-less technical reasons on December 8. 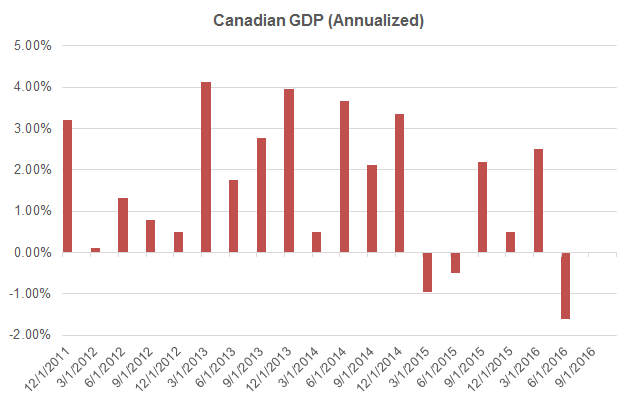 The Canadian economy continues to claw back lost ground after the Alberta wildfires earlier this year, while domestic revenues have been limited by the multi-year decline in oil prices. While private consumption had been weak for part of the year, we should expect to see it rebound amid a rebound in both business and consumer sentiment as well as investment barometers; the Canadian Ivey PMI surged to 59.7 in October.

The Chinese Manufacturing Index rose to 51.2 in October, beating market expectations of 50.2, the fourth straight month of economic expansion and the highest reading since July 2014. According to data provider IHS Markit, Chinese output expanded at the quickest rate in over five-and-a-half years, spurred on by a rebound in New Orders growth. Market expectations are for a small downturn to 51.0 in November, a positive albeit slower rate of growth than what’s been previously observed.

Official data reported that the Chinese economy grew by +6.7% in the third quarter, the same level as the first- and second-quarter. Export activity will have been aided this month by a weakening Chinese currency. The offshore Chinese Yuan recently traded as high as USD/CNH 6.965, having started the month around 6.7750.

Expectations for the November US jobs report are modest, with the unemployment rate forecast to hold at 4.9% and the headline jobs figure to come in at +175K. The trend of 200K jobs growth per month has recently been a psychological level for markets, but Fed officials tend have another number in mind. In October 2015 (and numerous times since then), San Fran Fed President John Williams wrote in a research note that he believed growth of +100K jobs per month was enough to sustain the growth in the labor force and maintain the current unemployment rate. In December 2015 (and numerous times since then), Chair Janet Yellen reiterated this same view. By the Atlanta Fed’s Jobs Calculator, assuming a 4.9% longer term unemployment rate, the economy only needs +120k job growth per month to sustain that level through October 2017.

The data should have no bearing on whether or not the Federal Reserve raises rates in December. Fed funds futures contracts are currently pricing in a 100% chance of a 25-bps hike next month. Instead, the pace of jobs growth will be important in helping the market determine what it believes the Fed’s glide path will look like: 25-bps rate hikes are currently priced in for June 2017 and December 2017.