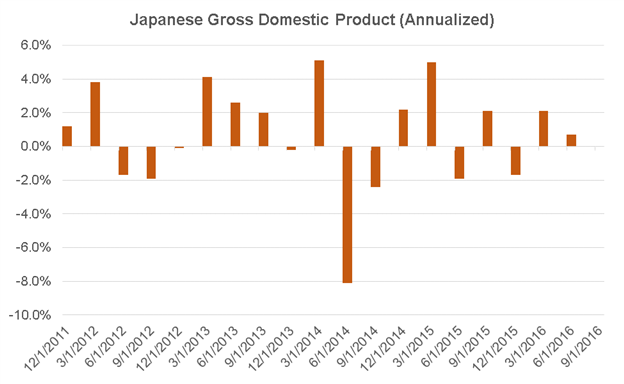 - Markets likely to remain sensitive to US election-related headlines as President-elect Trump’s transition team gets in place.

- US spending, inflation data to help guide markets on timing of next Fed rate hike – although markets are all but convinced it’s going to come next month.

*This article was originally published on Sunday, November 13, 2016.

Data over the coming week should further support a Federal Reserve rate hike in December. While there was some concern that a Trump win would give the Fed reason to pause, the wave election by Republicans sets up the potential for a very significant round of fiscal stimulus. As such the Trump reflation trade is very much on track, with US equities, US yields, and the US Dollar all running higher. Elsewhere, now that markets are moving through the first round of reactions to last Tuesday’s US Presidential election results, attention should slowly refocus on Europe.

The first look at Japanese growth for Q3'16 has analysts looking for a continuation of the recent light pick-up. After September’s upward revisions to both the first and second quarter figures, analysts forecast annualized growth of +0.8%, up from 0.7% in Q2'16.

The Bank of Japan recently admitted that further central bank action to boost growth and inflation may be limited and that the government needs to give the economy a boost via the fiscal channel. The BOJ said at the recent quarterly report that monetary policy alone would not be enough to hit its 2% inflation target.

Fallout from the Brexit vote is starting to hit the UK economy. UK consumer prices rose+1.0% in September 2016, compared with a +0.6% in August (y/y), its highest level since November 2014. Inflation is expected to nudge even higher in October, to +1.1% (y/y), as higher petrol prices feed through and food price deflation eases.

UK inflation looks set to rise even further going forward due to the ongoing weakness in the British Pound. The recent UK quarterly inflation report highlighted slightly better growth prospects post-Brexit and the increase in imported cost pressures due to the depreciation of Sterling.The Bank of England said that it now expects UK inflation to exceed its +2% target by spring 2017 before peaking at +2.8% in early-2018.

Any upside beat on Tuesday will increase expectations that the next move in UK rates will be higher, helping provide support to the British Pound. BOE Governor Mark Carney has already said that there are ‘limits’ to which above-target inflation can be tolerated. In effect, the sharp decline in Sterling exchange rates has limited the degree to which the BOE can assist the economy.

Both growth and inflationc continue to prove difficult to stimulate in Europe, despite the European Central Bank flooding the market with ultra-cheap money. At the last ECB meeting in late-October, President Mario Draghi declined to say if the central bank would extend its €80 billion a month bond-buying program from its March 2017 end date, although all signs point to an adjustment to the QE program at the December meeting.

Consumption is the most important part of the US economy, generating nearly 75% of the headline GDP figure. The best monthly insight we have into consumption trends in the US might arguably be the Advance Retail Sales report. In October, consumption strengthened further, according to a Bloomberg News survey, with the headline Advance Retail Sales set to increase by +0.6% (m/m) for the second consecutive month. The Retail Sales Control Group, the input used for computer GDP, is due in at +0.4% from +0.1% (m/m).

According to a Bloomberg News survey, US consumer prices increased by +0.4% from 0.3% (m/m) in November, or by +1.7% from +1.5% (y/y). The core readings should be similar, at +0.2% from +0.1% (m/m), and at +2.2% unch (y/y). Although these figures aggregately remain right at or below the Fed’s +2.0% medium-term target, they should be strong enough to keep the Fed on track to hike rates next month. A faster rate of inflation may be the result of the tightening labor market, which has accelerated wage growth in recent months. 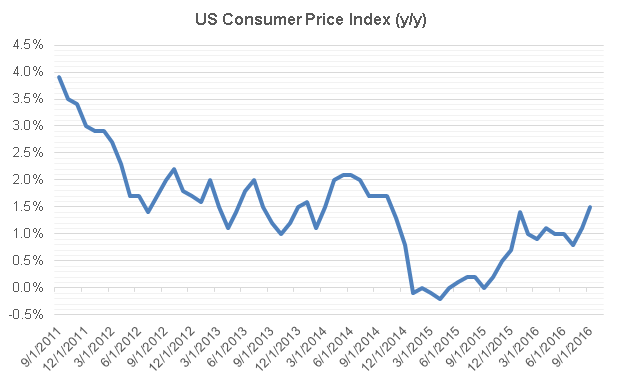