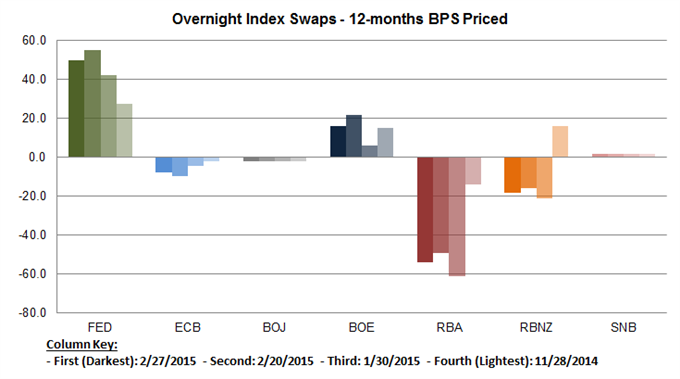 - Tuesday: RBA meeting; near 60% chance of cut priced in.

- Thursday: BoE and ECB to meet, although minimal chance of any action.

FX volatility has calmed down in recent weeks, but the coming days should see event-driven price action arise once more. The global trend of monetary easing will come into focus with four major central bank meetings over the coming days, as will the perceived direction of the world’s foremost central bank – the Federal Reserve – with the second release of the US labor market gauge of 2015.

Slipping below 0.78 US cents on Friday, the Australian Dollar weakened ahead of the Reserve Bank’s March 3rd rate decision. The move likely reflective of market expectations; a growing number of economists are expecting a 25 bps cut on Tuesday. The adjustment would drop the rate from 2.25 to 2.00 percent. Reasons for the potential cut include: an elevated unemployment level (+6.4%), weak business investment data (-2.2%) and a weak inflation rate (+2.1%) which rests near the bottom of the targeted 2-3 percent range.

After cutting the overnight rate by 25 bps in January, the BoC is expected to hold rates at the established level—0.75%. The anticipation of status quo is reflective of the constant state of the nation’s unemployment and inflation rates. Reported by Statistics Canada on Thursday, core inflation in January remained stable at 2.2% for the second consecutive month while unemployment remained steady at 6.6%. Furthermore, the previous rate cut was preemptive rather than combative in nature, with Governor Poloz remarking that the prior cut would buy the bank time to fully evaluate the effect of oil’s precipitous decline.

Deputy Governor, Minouche Shafik, provided a level of clarity regarding the relationship between the BoE and financial markets during a speech she delivered at the University of Warwick on Thursday. She stated, “Looking forward, it seems to me that the most likely next move in monetary policy will be a gradual and limited increase in interest rates.” The notion supported by a reversal in the annual wage growth (+2.1%) and a strong expansion in 2014 GDP (+2.6%). Previously established at 0.50%, the interest rate is presently expected to remain at this level. Investors will instead listen for a more decisive indicator for when rates will rise; late in 2015 or early 2016.

While Europe has stabilized politically, the country’s economic balance remains tentative. Despite the marginal 4Q increase in GDP, analysts remain unsure of the ECB’s ability to source the €1.1tr worth of bonds necessary to sustain an elevation in the Eurozone’s economy and consequently inflation. However, with the €60b per month initiative set to begin in March, the main interest rate is expected to be held at the current level of 0.05%.

During her two day testimony before lawmakers, Federal Reserve Chair Janet Yellen shifted the debate away from a strict adherence to “patience” to when and to what extent rates will move up. She stated that if conditions continue to improve “the Committee will at some point begin considering an increase in the target range for the federal funds rate on a meeting-by-meeting basis”. Part of this improvement necessitates a continued strength in the labor market. Thus, non-farm payrolls and the corresponding unemployment rate will be closely monitored. Previously at 257K and 5.7%, figures are expected to fall to 240K and 5.6%. 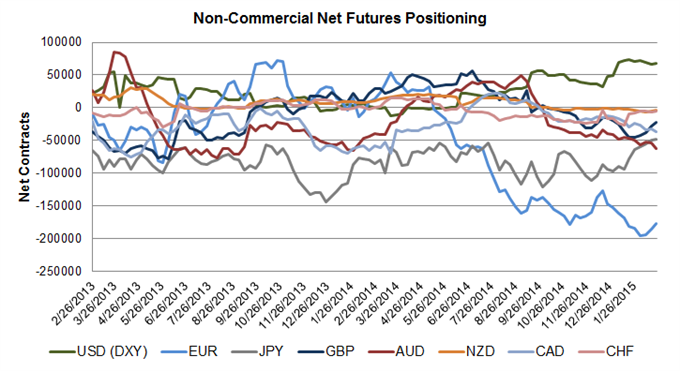 Read more: Too Early to Call a Bottom in EUR-crosses Despite CPI Data