UK Consumer Price Index (CPI) is expected to rise 1.6 percent in June. The rebound comes after inflation in May reported at a disappointing 1.5 percent, the lowest level in five years. Notably, UK inflation has tracked lower since the start of the year. Despite the soft inflation there has not been a significant deterioration in interest rate expectations. The British Pound’s strong appreciation against the US Dollar is evidence to this, as well as a moderate UK recovery, though policy makers note rising UK household debt as something to worry about. Last Thursday the Bank of England(BOE) decided to maintain their key benchmark interest rate at 0.5 percent – the lowest level since 2009, but in recent commentary, BOE Governor Mark Carney hinted the earliest a hike may come is at the end of 2014. Yet, markets will look for stronger inflation figures as a sign that a rate hike is materializing, adding to sterling appreciation. The consumer price index concerns Bank of England policy makers as they look to this key indicator to adjust or keep their policy stance.

US Advance Retail Sales is expected to rise 0.6 percent in June, marking the highest level in two months. The positive outcome may support the US Dollar, but it is largely Fed’s Yellen’s comments on monetary policy that will drive US Dollar movement on Tuesday. The Head of the Federal Reserve will discuss monetary policy and markets will listen for any change in her remarks to forecast for when a Fed rate hike may come. In the July 17/18 minutes of the FOMC meeting the Fed said QE3 is likely to come to an end at the meeting in October as policy makers appeared confident that the economic recovery is underway, and the labor market is steadily improving.

[Story: US Dollar Ready for Break… but Direction Awaits Volatility or Fed]

[Technical perspective: Weekly Price and Time: USD/JPY Inching Towards the Lows of the Year]

New Zealand’s headline inflation rate is expected to rise to 1.8 percent in the second quarter, adding to expectations that the RBNZ will raise rates to 3.5 percent next week. The RBNZ has already raised rates twice this year, prompting a strong appreciation in the New Zealand Dollar against its major peers. The interest rate advantage has made the kiwi an attractive spot for capital flows as investors seek yield in an environment plagued with low volatility. A firmer US Dollar on the back of stronger expectations for an interest-rate hike, a poor outcome in New Zealand inflation data, or disappointing news in Australia and China may undermine the kiwi strength.

China’s headline growth rate is to remain unchanged at 7.4 percent. Output is expected to increase in the second quarter to 1.8 percent, from 1.4 percent. The optimistic outlook may be evidence of an improvement in recent PMI data. Any signs the Chinese economy is picking up may boost the Australian and New Zealand dollar, otherwise, a disappointment in the Chinese recovery may hurt the commodity currencies. The reason being that China is a large trader partner with both Australia and New Zealand imports.

The Bank of Canada is expected to maintain its neutral policy stance, and its key lending rate unchanged at 1.0 percent on Wednesday. The Canadian Dollar has appreciated remarkably against the US Dollar, largely on the back of rising inflation. Canada’s core consumer price index reported at 1.5 percent in January 2014, by May it had jumped to 2.3 percent. Inflation has now exceeded BOC’s April projections as well as its 2 percent target, raising the scope for an interest rate hike, but due to an uneven recovery it is unlikely the BOC will pursue that course of action. Just last week the Canadian Dollar was shocked when the labor report added to the uneven recovery. The Canadian economy was expected to add 20,000 jobs in June, but instead employment fell by 9,000. The unemployment rate rose to 7.1 percent, from 7.0 percent.

Eurozone’s flash estimate of June’s headline core inflation is expected to come in unchanged at 0.8 percent. Given a negative outcome the Euro may come under pressure, but it will take a truly shocking event to release the Euro from its catatonic state. Following the latest course of action from the ECB on June to cut rates it appears the Euro may be looking to the US Dollar for directional cues.

[Technical Perspective: Weekly Price and Time: Big Test Coming up for the Euro] 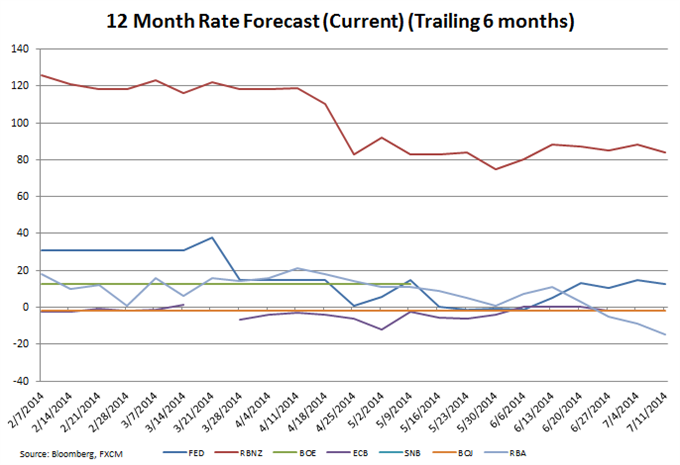