Inaction by the Bank of England (BoE) has kept the British Pound in a tight range versus the US Dollar. With news-flow reporting favorably to market expectations and the labor market continuing to outperform the BoE may be under pressure to raise rates in the foreseeable future. Until then, in recent policy comments, the BOE maintains that the perceived risk to the UK is economic downturn, noting geopolitical risk, and hosing as other sources of main risk to the economy. With this mind, any significant disappointment in top-tier economic data may prompt pull-backs in the single currency.

The New Zealand Dollar has been under steady selling pressure for the past five weeks, beginning on May 6th when the RBNZ Wheeler warned that the kiwi strength may raise odds for RBNZ intervention. Further weighing on the single-currency has been firming bets on Fed policy to normalcy, primary export prices declining (notably dairy), but most significant to RBNZ monetary policy, a marked decline in interest-rate hike expectations. The risk that RBNZ may pause interest-rate hikes is becoming more prevalent. Kiwi traders may pay special attention to the statement to discern whether the wording from the RBNZ remains hawkish, or is pivoting towards dovish. If RBNZ Graeme Wheeler and company entertains a dovish tone the kiwi may be subject to further downside.

Last week, the Reserve Bank of Australia (RBA) kept its key lending rate unchanged at 2.50 percent, maintaining its stance to keep monetary policy accommodative for some time. With the RBA’s tone unlikely to change, undermining speculation on future interest rate hikes, the Aussie dollar may look to US data for directional cues. Last week’s supportive ISM data set, upbeat Fed Beige Book survey and marginally better-than-expected US jobs report supports the argument for continued reduction of monthly asset purchases, laying the foundation for interest rate hikes. Firming Fed policy bets may weigh on the single-currency as it challenges the currency’s yield advantage. This week, a key figure to watch is the Australia jobs report, expected to show it added 10,000 jobs in May, a notable slow-down from the 14,000 added in April. 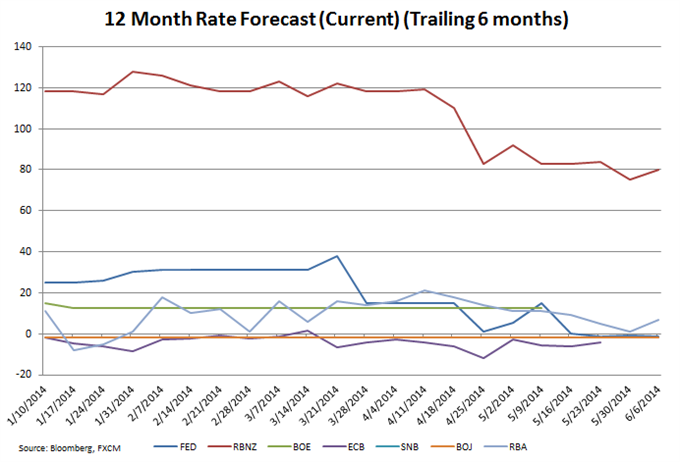