The Reserve Bank of Australia(RBA) is expected to keep the key lending rate unchanged at 2.50 percent, shifting the spotlight to the policy statement following the rate decision. Minutes from RBA’s May meeting revealed the central bank forecasts below-trend economic growth in the coming quarters and expects monetary policy to remain accommodative for some time. With the RBA’s tone unlikely to change undermining speculation on future interest rate hikes. The Australian dollar may look to US data for directional cues. On a technical perspective, the Australian Dollar is in range conditions.

News-flow from the Eurozone has increasingly disappointed relative to economists’ forecasts over recent months, opening the door for downside surprises. The euro has been under pressure as such outcomes may amplify speculation about an expansion of ECB stimulus at this week’s policy meeting. At the May meeting, ECB President Draghi stressed the euro rate in the context of price stability. He said that the ECB is open to intervention in June if needed as Euro’s impact on inflation is a serious cause for concern. His comments sparked an immediate sell off in the single-currency. If the headline inflation rate misses then the case for intervention to lift Europe from low-inflation may be strengthened.

The Bank of Canada (BoC) is expected to keep the headline lending rate unchanged at 1.0 percent, as BoC Governor Stephen Poloz is concerned that disinflation may creep up in Canada, though the headline inflation rate reached the 2 percent target in April. BoC Poloz and company continue to warn about persistent “downside risks”, and are unlikely to change their monetary policy stance on Wednesday. They may try to keep a dovish tone to prevent the Canadian dollar from strengthening. Canadian dollar traders may be more focused on the housing market for a broader outlook regarding the single-currency as a sharp drop in housing starts and building permits in March sparked some fears amongst investors. One of the figures of interest will be to see if a trend materializes and unsold new inventory grows.

The British Pound may be vulnerable to downside risk as the Bank of England (BoE) is expected to maintain its key lending rate unchanged at 0.50 percent and asset purchase target at 375B for some time. Traders have turned to evaluating inflationary trends for clues on interest rate hikes, but of notable interest is the housing market. Policy makers have turned their focus on the recent explosive rate of price gains in the urban markets that BoE Governor Mark Carney said surging house prices pose the biggest risk to the U.K. economy. BoE Martin Weale, a key policymaker, said a rise in the cost of borrowing should happen “sooner rather than later.” He says the economy has sustained fairly rapid growth in demand, and that too long a delay would eventually mean a sharper and more painful tightening of policy. His argument to raise borrowing cost stem from faster-than-expected growth and evidence of bubble-like conditions in London’s property market. Yet, the British Pound may be susceptible to a deeper correction if the BoE decides to control housing prices by imposing stricter loan-to-value and loan-to-income ratios first, as the latest Bank of England Quarterly Inflation report said there is still slack in the economy that needs to be absorbed before interest rate hikes are considered.

Speculation on European Central Bank (ECB) stimulus at the June meeting has weighed heavily on the Euro. The ECB interest rate decision may drive volatility as the expectation is for a cut of 15 basis points. The spotlight will undoubtedly turn to ECB President, Mario Draghi, as he warned in May’s meeting that the ECB is prepared to intervene. Low inflation has plagued the Eurozone and peripheries for some time, and the FX rate has sparked some concern amongst policy officials. Any surprises by the ECB may warrant a Euro rally.

The DJ FXCM Dollar showed signs of a slowing rally as it failed to hold multi-month highs. Traders will look to the US nonfarm payrolls report for directional cues in Dollar pairs through the week ahead, but it is interest-rate hike expectations that may ultimately drive the US Dollar. Economic news-flow from the U.S. appears to have improved and any disappointments have not prompted FOMC to waver on its monetary policy stance. An upbeat jobs report may support the US Dollar as it may build an argument for interest-rate hikes. 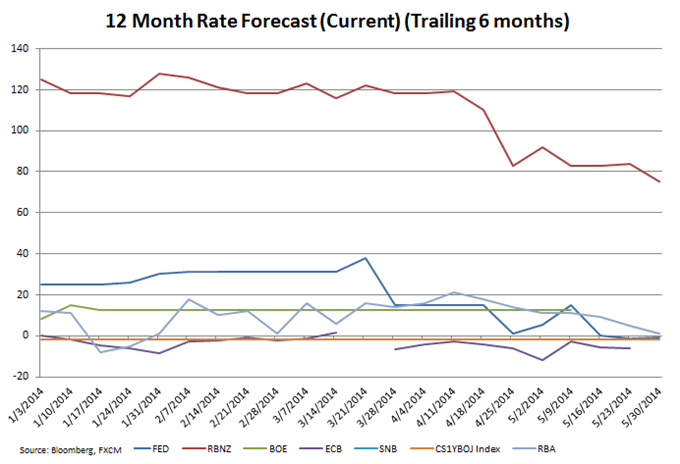