Traders may overlook first-quarter Switzerland GDP figures as they defer to developments out of the U.S. and Europe. The US Dollar has strengthened to the highest level vs the Swiss Franc in 3-months. The move comes on the back of renewed strength in recent U.S. news-flow and the ECB hinting to ease monetary policy at its next June meeting. The Eurozone is Switzerland’s primary trade partner and international financial companion, so any monetary policy adjustments by the ECB may significantly impact the Swiss Franc. The correlation between USDCHF and EURUSD is close to -0.90 – meaning the currency movements of one mirrors the other, and at times to the same magnitude. Increasingly deteriorating news-flow out of Euro is mounting pressure on the ECB to ease monetary policy. ECB’s easy policy may be the fundamental driver that leads to Swiss Franc’s depreciation against the US Dollar – though renewed strength in the US Dollar may help drive the move further.

US first quarter GDP annualized may not be the catalyst to support the US Dollar this week. The advance U.S. 1Q GDP report is to show the world largest economy contracted 0.5 percent during the first three-months of 2014. Any miss in expectations or a downward revision may weigh on the U.S. dollar as it weighs on interest rate expectations and Fed’s move to normalize monetary policy. The first quarter of 2014 saw the US Dollar lower, but the FOMC remained steadfast in its commitment to policy normalization, laying the foundation for interest rate hikes. US Dollar bulls are looking to hone-in on a time-frame for a first interest rate hike. The fed has announced ‘mid-2015’, but Fed funds futures still project an opening move later than the general time frame.

The USDJPY was able to pare the decline following the Bank of Japan (BOJ) interest rate decision last week, but yen strength may renew should data prints spark a greater deviation in the policy outlook. The BOJ announced that it would keep its monetary policy hold as they have renewed confidence that the third largest economy can withstand the April 1st sales tax hike. Earlier in the month first-quarter Japan GDP crushed expectations, now the central bank has raised its forecast for business investment. Governor Kuroda and company are confident Japan will achieve the 2 percent inflation target set a year ago, the forecast for inflation was also raised to an annualized 3.1% in April. The USD/JPY may continue lower on dampening bets of seeing the BOJ expanding its asset-purchase program.

First quarter Canada GDP headlines the last major economic event of the week. GDP is not as important as CPI in the context of monetary policy, but the report may bring a knee jerk reaction in volatility. Last week Canada headline inflation rate came in at 2.0 percent and in-line with estimates, meanwhile the month-on-month rate came in at 0.3 percent vs 0.4 percent estimated. Yet, Canadian dollar traders may be more focused on developments in the housing market for a broader outlook regarding the single-currency. With spring upon us the Candia housing market will be put to the test as people lock down purchases for the summer. One of the figures of interest will be to see if a trend materializes and unsold new inventory grows. This would prompt contracts to reduce starts, and may spill over into the existing home market. Nonetheless, a strong GDP print may bode well for the Canadian Dollar (lower USDCAD). 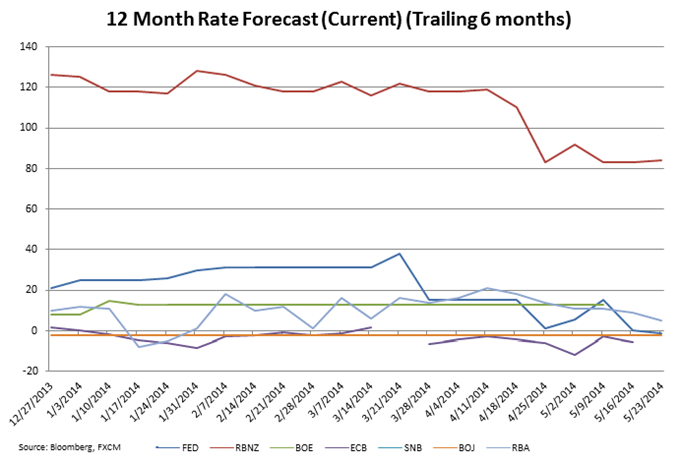