The British Pound may be vulnerable to downside risk as the latest BoE Inflation report forecast the bank rate to stay at low levels for some time. Since the MPC decided to drop its informal unemployment target of 7 percent as the threshold for a discussion on hiking rates, traders have turned to evaluating inflationary trends for clues on interest rate hikes. Indeed, any impact on the inflation expectations may dampen current outlooks for a BoE rate hike in early 2015 and may weigh on GBPUSD. It is worth noting that the previous two CPI reports, despite showing decreasing rates of inflation, have ultimately led to a stronger British Pound.

Traders will look through the BoE minutes for information on housing, a recent area of interest for policymakers given the explosive rate of price gains in urban markets. Following the U.K. Quarterly Inflation report BoE Governor Mark Carney said surging house prices pose the biggest risk to U.K. economy, and that the MPC could do more to tackle excesses if needed. Housing is the Bank of England's most significant domestic concern now that the economy is improving, and the MPC is most likely to discuss the latest housing developments in the June meeting. Any new information to the risks of housing prices may weigh on the British Pound.

The central issue relating to US monetary policy is whether the Fed will continue “tapering” its asset purchases leading to the program ending later this year, and laying the foundation for interest rate hikes. The first quarter of 2014 saw the US Dollar lower, but the FOMC remained steadfast in its commitment to policy normalization. With this in mind and recent news-flow reporting favorably for the US,market participants will not expect any rhetoric that suggests a pause in tapering. The minutes from April 29-20 FOMC should leave little to no room for any doubts about the continuity of the tapering process. In the last policy statement the Fed said it will continue to reduce asset purchases by $10 billion monthly as the economy gains and consumers spend more.

UK expansion appears more broadly based than previously estimated as spending by both households and businesses have grown solidly in 2013. Transactions are up a third in the housing market and house prices are 10 percent higher, nationally. Output growth is cited to be supported by reduced uncertainty and better access to credit as well as significant improvement in employment. As the U.K. economy continues to grow the argument for higher borrowing costs strengthens. Given a miss in growth figures the British Pound may trade lower, especially as the BoE has drawn attention to the slack remaining in the economy, which suggests there could still be 1-1.5% growth left before the cyclical peak is reached. A weaker GDP figure, in light of recent BoE commentary, would suggest rates will remain lower for longer.

Canada CPI headlines the last major economic event of the week.CPI is important in the context of Bank of Canada monetary policy, but inflation might lack the necessary punch this time around as Canadian dollar traders are seemingly more focused on the housing market for a broader outlook regarding the single-currency. Housing starts and building permits rebounded in April dispelling some fears of a downside risk in the housing market, particularly as starts and permits plummeted in March. With spring upon us the Canadian housing market will be put to the test as people lock down purchases for the summer. One of the figures of interest will be to see if a trend materializes and unsold new inventory grows. This would prompt contracts to reduce starts, and may spill over into the existing home market. Nonetheless, a CPI miss may lead to a weaker Canadian dollar (stronger USDCAD), especially considering the weaker CAD in recent months should be a tailwind to inflationary trends. 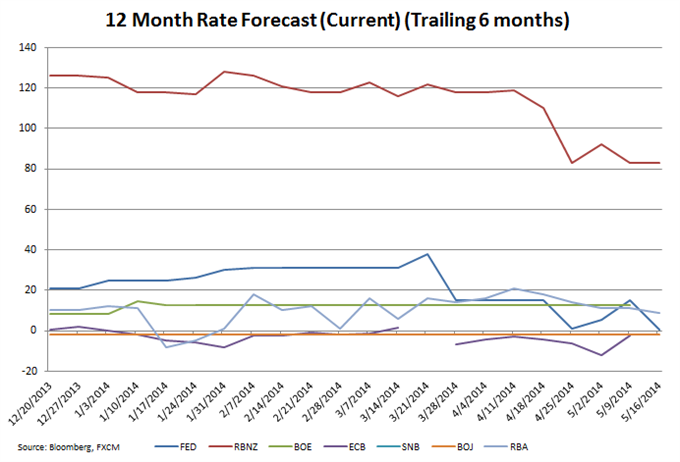