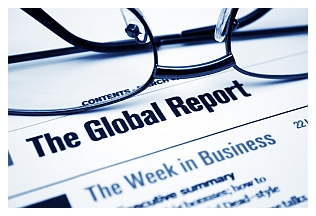 Key Events on the Economic Calendar This Week

- Bank of England Inflation Report comments on home prices to be noted.

Jobs data out of the UK continues to do well and has even led the Bank of England to drop its informal unemployment targets over the last few months. This leaves market participates eyeing inflation data out of the UK for any hints in regards to rate increases, but the relatively soft data may not be enough to continue to press multi-year highs for much longer. Although data has been some of the best in the west over the last few months, housing prices have contributed a large degree to higher inflation. Unless we do see a pickup in wage growth, it likely that any higher inflation will have to be on higher home prices. With the MPC meeting in June to discuss these developments, it may be the case that the GBP has run its course. London has been the leader in luxury home sales as affluent buyers from emerging-markets have sought to diversify their holdings in more stable markets and this demand may fade in the coming months. The luxury home boom has fueled building from London to New York over the past few years, but as tremendous amounts of supply come online in the coming months, that supply may outstrip demand in the niche sector. With those prices leading some of the pickup in inflation, caution should be urged among GBP bulls as the Bank of England could easily take steps to calm the housing market without raising rates. Any impact on inflation expectations may dampen current outlooks for a BoE rate hike in early 2015 and thus add GBPUSD downside pressure.

Although the first quarter data will not give markets a full overview of the tax hike impact, it will still present participants with a view of the economy as the tax hikes came into play. Prospects have not been bright as of late with trade balance data hitting record deficits and domestic data that has been relatively mixed. Still, price action in JPY has been more focused on global markets, most notably yields, over any data out of Japan. So long that the GDP data does not exceed market expectations by too large of a margin, the data is more likely to impact sentiment and BoJ speculation more than intraday price action. 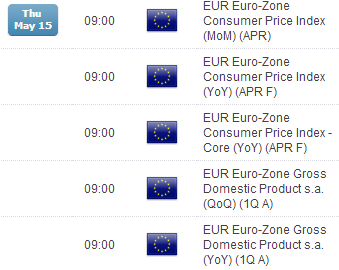 Some April data that we received on CPI just two weeks ago indicated more of the same: low levels of inflation. This continues a lower trend in CPI that has left the ECB optimistic, until now. In February Draghi and others at the ECB stated they believed price levels would improve in March. In March they were ‘surprised,’ but stated April would be ‘better.’ Credibility of optimistic rhetoric is likely to be challenged once more and at ECB meeting last week we saw a notable shift in tone from Draghi. Although the central bank did not give a specific rate at which they favor intervention, a deteriorating situation will push the ECB to act sooner rather than later, possibly as soon as June if the Euro remains where it is now. 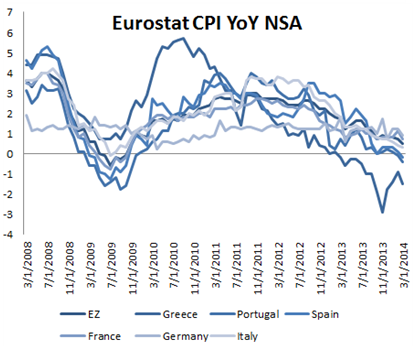 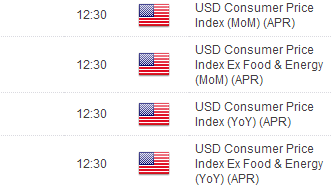 CPI data out of the U.S. will be the last major economic calendar event of the week. In terms of direction for the greenback, it is important to note technicals in the Dow Jones FXCM USDollar Index as we near critical support levels. CPI data is not one of the more volatile baring data prints, but still serves importance in the context of Fed policy. Any strong deviation from expectations to the downside could put immense amount of pressure on USD.