After last week’s limited U.S./European data sessions, attention and volatility will most likely shift back from Asia. Kicking off this week we have seen the Yen lose some gains from the last few sessions and we’ve already gotten European CPI data that came in a tenth of a percent below expectations. The MoM print came in at 0.3% vs. 0.4% and -1.1% prior while the final figure for February stands at 0.7%. 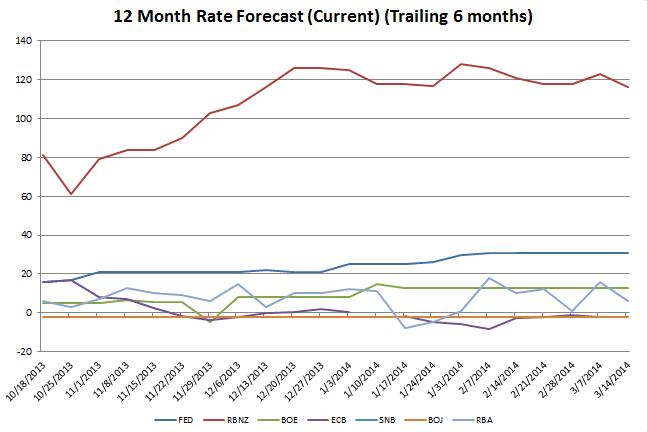 This will be the last major data print out of the U.S. ahead of the FOMC Rate Decision on Wednesday. Current month over month forecasts peg the figure coming in at 0.1% leading to a YoY print of 1.3%. As has been made clear multiple times by FOMC members, excluding a major disruption in financial markets, the Federal Reserve is likely to maintain its taper at the current rate per meeting. Some on the committee have even suggested that the taper should be sped up in order to guarantee that asset purchases end by Q4 2014. As for insight into the CPI print, February did see a run-up in WTI Crude prices over the $105 level and could contribute to a better than expected inflation figure. As of late though energy prices have pulled back in March below $100 and this may jeopardize any gains for this month’s figure. Watch USD/JPY in addition to USD/CAD as we have Manufacturing Sales MoM also being released at 8:30AM EDT.

Current economists’ estimates and market expectation point to an additional $10B reduction in asset purchases, spread evenly across mortgage backed security and Treasury purchases. This would mark the third consecutive taper at the FOMC Rate Decision and will leave the Fed’s total purchases at $55B per month. Although Dr. Yellen has stated that the Federal Reserve is not on a preset course to end the bond buying program, many committee members have advocated for an elimination of QE3 by Q4 2014. While some have voiced their approval for an even faster reduction, it would be highly unusual for Dr. Yellen to take that route as not to stir market volatility further. All USD and JPY crosses should be watched. Note that AUDJPY as of late has held the strongest correlation to active session equities.

Following the RBNZ rate hike last Wednesday, the Kiwi has gone on to set highs not seen since March of 2013. Within pips of all-time NZD/USD highs and with rate hikes expected over the next year already priced in, we may need to see incoming data far beyond market expectations in order for major buyers to emerge. The YoY figure is expected to come in at 3.2% vs. 3.5% prior while the QoQ print is expected at 1.0% for the fourth quarter vs. 1.4% prior.

With safe haven flows putting downward pressure on the EUR/CHF exchange rate as of late in combination with the possibility of negative deposit rates in the EU if disinflation continues, the SNB may move to use stronger language in its policy statement. As usual it is expected that the central bank will note the EUR/CHF floor and their continued commitment to its defense, but we may very well see the SNB come out and discuss policy in the context of European rates. If the ECB were to act and put forth negative deposit rates, downward pressure on the Euro could pressure the SNB’s 1.20 floor very quickly. These are risks that the central bank may attempt to front run with its own verbal intervention. Watch EUR/CHF for clues and USD/CHF for a greater follow through in price action.

With USD/CAD consolidating over the past few weeks, any event risk such as Canadian inflation data on Friday present a fundamental catalyst possibility for a resumption of the breakout uptrend. Although data has been relatively well founded over the past few weeks, weakness in the Canadian market remains when we look at data released since December. Current estimates call for a 0.9% rise in price levels vs. 1.5% prior. If we see a miss here, the Bank of Canada may need to address slowing price levels and will therefore make the next central bank meeting all the more important to the Canadian Dollar.

Get the latest live rates with our Forex Rates