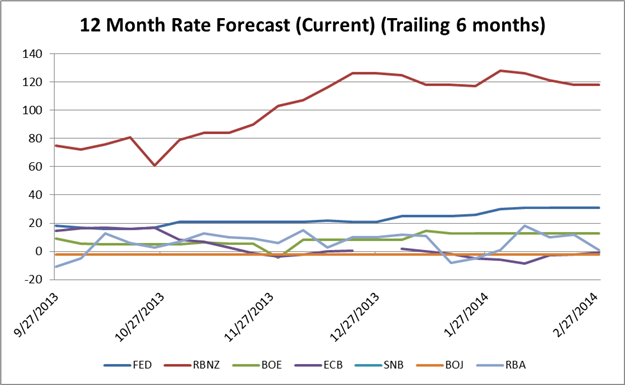 - Concerns of Possible Conflict in the Ukraine Sparks Risk-Aversion

See the DailyFX Calendar for a full list, timetable, and consensus forecasts for upcoming economic indicators. See all of this week’s “high” important events.

The next few days are one for the Aussie as we kicked off the week with China non-manufacturing rebounding in February after dropping for three consecutive months. The Aussie rose against the US Dollar following the positive data print. Although market participants do not expect a rate cut, in light of recent developments out of both Australia and China we cannot dismiss what sort of standard or non-standard measures the central bank may be willing to take. With the Aussi having held up relatively well and above the 90 mark over the past few days and weeks, there is an inherent risk to the RBA rate decision in the context of prior rhetoric from Gov. Stevens. The head of the central bank has openly stated on numerous occasions that the Australian Dollar remains too high and that action could be taken to bring down the AUD/USD rate to a more comfortable level in the low 80s. The RBA likely has insight into the YoY 4Q GDP reading and any dovish rhetoric is likely to provide guidance as to the direction of the reading on Wednesday.

Being the last major event risk directly for AUD crosses, the RBA may have already set the tone for this reading’s expectations. All eyes are on the Aussi following major technical resistance levels that it has failed to break in addition to fundamentally poor data prints including the Private Capital Expenditure 4Q figure last week. The reading usually has little impact on the Australian Dollar, but the huge miss drove an unusually steep decline. On the fundamental front, we learned last week that Qantas would be cutting 5,000 jobs after posting a quarter billion dollar pre-tax loss. This looms ominously after Alcoa plant closures / job cuts in addition to negative guidance from major companies in Australia. Note that on the back of Chinese growth, the nation has not had a recession in over two decades. One of the few major bullish points for this GDP figure could be a distortion from rising home prices. Many wealth Chinese buyers have been propping up the market in major cities as they seek to diversify their holdings outside the mainland.

After a continued correction post U.S. and Canadian GDP figures on Friday, any dovish forward guidance could help resume the upward USD/CAD breakout trend that helped kick-off 2014. As was noted at the last BoC meeting, the central bank lowered 2015 growth projections while stating that the Canadian Dollar remained overvalued despite the recent depreciation. This recent move lower below the 1.11 level may prompt Gov. Poloz to up his dovish rhetoric and forward guidance on rates amid weaker 2014 data and a housing market that is screaming risks of a possible soft landing.

With the Euro at critical technical resistance and a ten year trend-line, all eyes will be on this central bank meeting. Although composite inflation data has been mixed as of late, Germany’s figures continue to come in slightly below expectations following the massive miss in October that drove the ECB to cut rates by 25 basis points. If little rhetoric is offered in regards to negative deposit rates or some quasi-legal bond purchasing framework, the Euro could continue to strengthen on the distorted fundamental front- especially in the context of broad based USD weakness against all but the commodity and emerging market currencies. On the bearish front, we must take note in regards to developments out of the Ukraine. Any serious military action (combined with some dovish ECB rhetoric) could help fuel broad based weakness in EUR crosses- especially in any EURJPY risk off move amid a strengthening Yen.

To end the data filled week, we will get US Non-farm Payrolls for February, revisions for January as well as the Canadian employment figures all at 13:30GMT. Although NFP data has been dismal as of late, Fed officials (and even Dr. Janet Yellen in her testimony in front of the Senate) have hinted that excluding any major catalyst, the reductions in asset purchases are likely to continue at the March meeting. This is likely to be a major test for the greenback as poor data can only be blamed on the weather for so long before the realities set in. CAD, USD and JPY crosses are likely to see the highest degree of volatility as shifts in risk-on and risk-off sentiment continue to dominate markets amid large degrees of uncertainty as the Fed sets out to end asset purchases in 2014.