Trouble Lurks Ahead as ECB, NFPs Collide with Swell in Fear, Volatility

- Canadian and US labor market data on Friday.

- Investors are becoming more and more worried about the end of monetary stimulus.

Volatility is starting to swell and it couldn’t come at a time with more potential to stoke large breakout moves. For a cheap analogy, the economic calendar this week is equivalent to throwing gasoline on a building inferno: evidence has quickly cropped up across the developed world that growth slowed at the turn of the New Year; emerging market currencies are quickly losing value as “hot money" flows unwind; and all of it is stoked by the Federal Reserve wanting to end its expansive easing program QE3.

We haven’t crossed the rubicon by any stretch of the imagination, but it’s evident that uncertainty is making a comeback. When the Federal Reserve announced its first QE3 taper on December 18, 2013, the US 10-year Treasury Note yield was 2.860% - it opened this week under 2.700%. Chief Currency Strategist John Kicklighter notes that “we have yet to pass the threshold between the emerging markets turmoil to a major unseating of the broader financial system. The potential is ripe given the exposure of the markets, but investors are yet to abandon their complacency and risk exposure.” 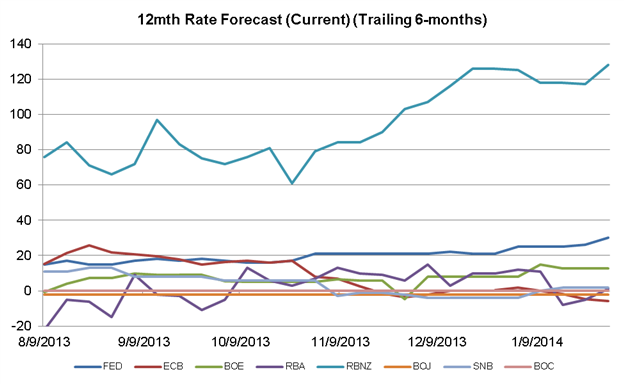 This RBA meeting marks a critical time for the Australian Dollar as it sits just above significant longer-term support versus the US Dollar, while market participants seek clarity from the central bank. In November, we saw the bearish fundamental case for the Aussie continue to develop as Governor Stevens indicated that the Australian Dollar remained overvalued, possibly by as much as 10%. On the flip side, consumer prices remain elevated and the housing market has seen a period of steadily increasing prices. There’s growing need to a rate hike perhaps later this year, and the degree of acknowledgement of this will determine how the Aussie responds.

Although market participants have been left without a policy statement for some time now, Governor Carney has been unusually vocal over the past few weeks. With the BoE possibly worried about continued Pound strength amid strong UK growth prospects and a flight from risky emerging market currencies, now would likely be a good time for the central bank to release a policy statement – especially as its forward guidance strategy looks obsolete. The BoE will also have a chance to ease market speculation of sooner rate hikes in the ever-important Quarterly Inflation Report on February 12.

Like this week’s RBA meeting, the ECB Rate Decision on Thursday may be one of the most important meetings we have had since the last 25bps rate cut. Recall that October figures for German CPI came in far below expectations and surely prompted that rate cut we saw in November. With January preliminary figures for German inflation missing estimates last week, the central bank may feel the need to discuss what measures can be taken moving forward.

Although ECB officials can appear strikingly complacent in the face of many headwinds, surely they cannot ignore risks of further disinflation in Europe’s strongest economy. Chatter of the ECB ending its sterilization of its bond buying program – which means the ECB drains liquidity in the equivalent magnitude of sovereign debt purchases on the secondary market, so as to prevent its balance sheet from swelling - would be another way for the ECB to effectively ease if a nonstandard rate cut (15-bps to 0.10%) is disliked.

Weak data out of Canada over the past month has helped USDCAD breakout of a longstanding range and achieve multiyear highs, reaching as much as +600-pips higher since New Year’s. The prior print for December indicated a -44K contraction while market forecasts had called for a net positive change of +13.1K. If we do see a prolonged correction this week in CAD pairs, a weak print here could be the momentum needed to help the USDCAD breakout continue higher.

The key pairs to watch are CADJPY and USDCAD.

If the US Dollar is to hold recent gains versus the European currencies, we may have to see a strong print here in combination with a healthy upward revision to the December print as many market participants are expecting. Last month’s print came in far below the +197K expectations as the release indicated only a +74K net change in NFPs nearly a 5 standard deviation miss!

Note that although the buck weakened massively at the last print, the greenback did see gains against CAD as their employment data showed even worse prospects. This key data print is likely to set the tone for the greenback moving forward in February. Watch the US 10-year Treasury Note yield as a guide for the US Dollar on this print – higher yields, higher US Dollar.