- US Dollar has unusual circumstances that might favor further upside.

Last week was highlighted by an unexpected jolt to the Euro, after incoming inflation data came in at its weakest level since November 2009 – a post-global financial crisis low. Rate cut expectations have started to build as a result, knocking back a recent market leader. Needless to say, after the Euro’s slide against all of the major currencies last week, there will be an intense focus on the October ECB meeting this Thursday.

Given the scope of the Euro’s declines, there is potential for an explosive move in either direction – a further breakdown on a shift in policy or a retracement as traders scale back bearish expectations. The EURUSD itself may be the most volatile currency pair over the coming few days, with several significant US event risk on the calendar as well.

In the wake of US data generally weakening from August through October, it may be “priced in” to markets any slowdown in the US economy. After all, expectations for the US economy to slow after the March sequestration proved false, and the US Dollar screamed higher from April through early-July. Accordingly, we are watching for resiliency in US economic data – especially the October NFP figure – as it could touch off renewed US Dollar strength through November. 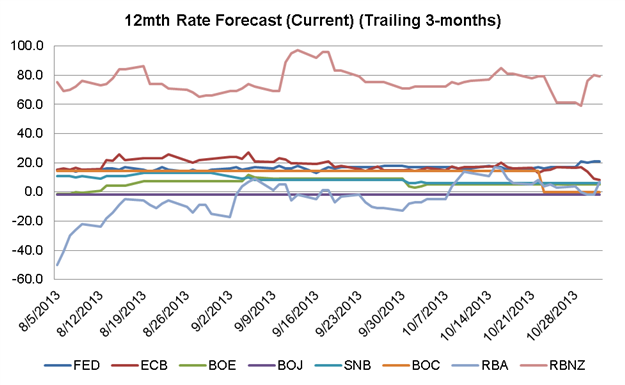 Market participants are not expecting a rate cut this time around, but traders must note comments from Governor Stevens last week where he stated he expects the Australian Dollar to be ‘materially lower’ sometime in the future. As not to upset a recent rebound in the economy, Governor Stevens may move to talk down the currency as incoming economic data, particular from the housing sector, has been offering little wiggle room for dovish commentary.

It is important to note that the ‘surprise’ factor of this central bank governor remains: Governor Stevens has changed the benchmark interest rate 26 times since 2006, one of the highest for a developed country’s central bank.

The US government shutdown is an easy scapegoat yet it will bear the burden of blame if the ISM Services index contracts as forecasted. Although many have been expecting manufacturing and non-manufacturing data to be heavily impacted by the shutdown, the large negative impact once thought to occur has not been seen. A disappointing print here would certainly bring back fears that October will follow September’s data to the downside, thus delaying any taper out of the Federal Reserve.

Although ECB President. Draghi has refrained from talking down the Euro over the past few weeks, disappointing CPI data last week may pressure the central bank president to use language that may help push EUR-crosses lower. Any indication of forthcoming monetary easing would be fatal, but there may be reason as earlier gains in Euro-Zone economic indicators this year appear to be proving short-lived.

In absence of an explicit promise of more easing, it is important to acknowledge the alternative scenario that a simple downgrade of the economic forecast but no indication of another LTRO – something the ECB made clear last month by suggesting there wasn’t a crisis, so there was no need to flood the banks with cheap capital – the Euro has room to make up after last week’s loses.

In other words: the EURUSD opened the week near $1.3500; and we would be very surprised if it finished nearby after Thursday and Friday.

Estimates from most economists compiled by Bloomberg News see the combined impact of higher interest rates (July and August) and the fear of the US government shutdown impact (September) at a 0.5% reduction from 3Q’13 annualized growth. If the US economy grew faster than economists expected in the face of a shutdown, we may very well see a beat of the slowed+2.0% estimate. A print over +2.0% would help ease fears of a slowing US economy into the 4Q’13, providing support for the US Dollar.

The +125K survey is the lowest since November 2012. While September NFPs came in below consensus forecasts, a miss here will not be viewed terribly unfavorable by the market and might not contribute to extended USD-weakness; the ‘blame the US government shutdown’ game is long in the tooth. The risk to FX here is disproportionate as sentiment is currently USD-negative; a beat on this figure – the single most important US economic report – could spark a greater US Dollar turnaround.