- Several “high” rate US events on the calendar aside from FOMC.

- Euro-Zone data important, but will be secondary.

The Federal Reserve meets for its October policy meeting in what will undoubtedly be the top event risk on the week. While we are seeing that a non-taper of QE3 is expected (on hold at $85B/month), the FOMC policy statement will be particularly important in light of the fact there isn’t a press conference or a revision to the economic forecasts expected. Recall that recent important US economic data has been disappointing.

As investors weigh the pros and cons of the Fed’s policy path for the next few months, there are several of other events on the calendar that will drive price action. Of note, we expect the recent Chinese lending fears theme to continue to influence, though such risk could be diminished upon one or more liquidity injections by the People’s Bank of China. Concurrently, we’ll get an important perspective on the Chinese economy this Friday when the October PMI Manufacturing report is released. 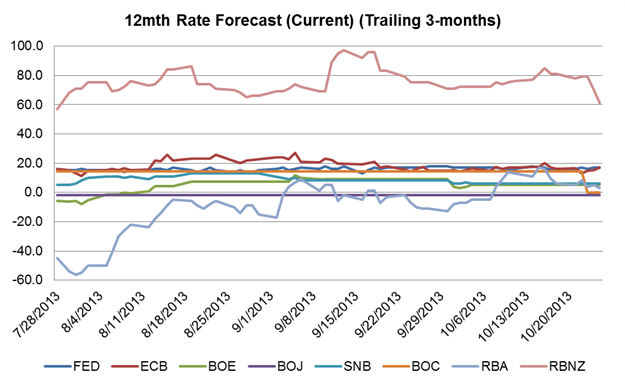 Consumption is the cornerstone of the world’s largest economy and the Advance Retail Sales report is the best proxy for consumption in the United States. Retail sales growth month over month experienced gains all but one month (March) in 2013 thus far, but disappointing September data combined with the government shutdown threatens to break that trend.With this delayed September print looking to come in at 0.0%, data that will include the October government shutdown is not looking promising. Continued weak data such as this will lead market participants to take the view of a later rather than sooner reduction in asset purchases by the Federal Reserve.

After hitting highs not seen since at the turn of 2008, confidence looks to take a large hit due to the US government shutdown. If the reading comes in at 75.0 as surveyed, it will take back 5 months of gains made since May. US consumer confidence has been the stabilizing force keeping consumption trends boosted, and a further decline here could indicate a more broadly slowing US economy over the coming months. The data will be important to keep recent fears over the US government shutdown in context ahead of the Wednesday Fed meeting.

With the US government shutdown impacting the US economy since the FOMC last met, it is unlikely we will see a reduction in asset purchases here (this fear materialized as Chairman Ben Bernanke warned). If the Fed did not see enough positive conditions to taper in September, it is thus unlikely due to the fact we have had worsening data – mainly, the September NFPs. Multiple FOMC members have reiterated that the delay in data releases would make their ‘forecasting’ difficult as to whether the economy could sustain the reduction in purchases.

The key pairs to watch are AUDUSD and USDJPY.

Although market participants have spent the last few weeks pricing in a higher benchmark interest rate in New Zealand as the central bank wishes to curb a housing boom, expectations of that rate increase have declined thus correcting the NZD lower. The RBNZ does wish to curb its housing boom, but far more important is the stability and lower value of the NZD relative to her major trading partners’ currencies. Damping expectations of a rate cut in the policy statement may contribute to further NZD strength over the coming weeks.

As the PBOC tests how far it can step back from providing liquidity in the inter-bank lending market, it risks upsetting recent gains in the economy since earlier this summer when SHIBOR rates spiked to their highest levels on record. Since the PBOC has stepped back over the past week- in conjunction with Bloomberg reporting on its housing sector- overnight inter-bank lending rates have crept back up to 4.434%. The impact of these increases may not be felt in October’s PMI, but if the reading comes in lower and the PBOC fails to step in over the next week, commodity block currencies that have been the beneficiary of gains may begin to see partial corrections if the fundamental story plays out.

The key pairs to watch are AUDNZD and AUDJPY.