- US Dollar remains weak as US yield curve continues to flatten.

- US data backlog to be resolved starting this week.

- Focus slowly shifting from US fiscal drama to US monetary drama.

The US Dollar’s fate will no longer be decided solely by speculation over fiscal headlines as the reopening of the US government brings a cascade of the missed data since the beginning of October. Notably, US statistics bureaus are operating on an unusual release schedule the next few weeks, resulting in the odd occurrence of having a monthly US labor market report falling on a Tuesday – October 22.

A Tuesday NFP release is a slightly different animal than a Friday NFP release, in the sense that traders will be able to react to the figures for a continuous 24-hour period, rather than facing the imminent close of the European trading session and no Asian session thereafter due to the weekend. Without the need to balance books and close positions for the weekend, traders could treat the figures in a less dramatic fashion.

With a great deal of market focus on the September US NFP figure and the inevitable forced conclusion it will mean for the Federal Reserve’s policy meeting next week, US Dollar volatility should remain elevated in the coming days (though lower than its apex during the fiscal deadlock). However, in light of the US fiscal debacle which created a bigger drag on growth, we do not expect the Fed to taper QE3 in October; and a Bloomberg News survey released last week sees the first cut to QE3 coming in March 2014. 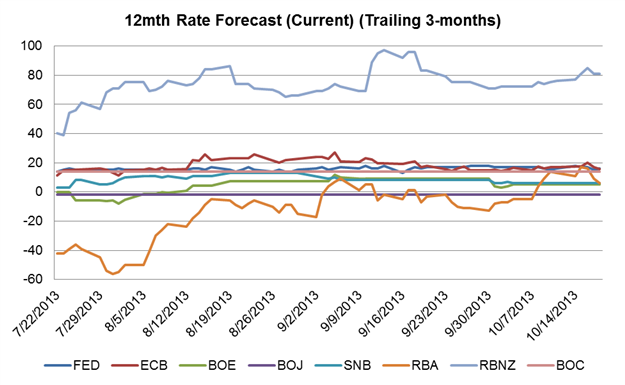 The delayed release of the September US labor figures may have a silver lining: the data set will be more complete as only approximately 70% of firms respond to the Bureau of Labor Statistic’s reporting deadline to be included in the NFP survey pool. With the release three weeks late, a more complete picture may be painted of the US labor market.

As such, the +180K expectation will be important to achieve if the US Dollar is to regain footing. With Initial Jobless Claims hovering near post-2008 crisis lows and the Employment subcomponents of the ISM Manufacturing and Services reports holding in modest growth territory, we find a print in the range of the six- and 12-month jobs average of +160-184K likely.

A soft NFP figure, and generally speaking weak US economic data, will have a more amplified negative impact on the US Dollar than a strong figure would help it, as market participants have started to unwind the US yield curve’s pre-September FOMC price action (which amounted to US Dollar strength as the yield curve steepened) – a sign that QE3 will indeed continue into early-2014.

Accordingly, incoming inflation data being revealed now illustrates the combined impact of an elevated Australian Dollar exchange rate and slowing Australian growth in the early parts of 2013. The weaker Aussie midyear should result in inflation figures showing a turnaround by the 1Q’14; and barring a significant miss (<1.6%), the Aussie shouldn’t suffer significantly. We note that 12-months rate expectations have increased to and held in positive territory in October, signaling the hawkish shift in RBA policy expectations and recent support for the Australian Dollar.

The key pairs to watch are AUDUSD and AUDNZD.

The policy statement two weeks ago was lacking in comments that market participants were expecting. Data out of the UK in recent weeks has been mixed but mostly positive and moving towards some of the key benchmarks that the Bank of England established for change in monetary policy (overall, UK economic data has been a global leader since May). Recognition of these positive developments by the central bank may aid continued British Pound strength as additional QE becomes a more distant possibility.

Last month’s Japanese inflation print was the annualized inflation reading since November 2008. Although these near-term improvements have supported the Bank of Japan’s actions in hindsight, Japan is not out of the woods by any means. In the coming months, PM Abe must pass a sales tax measure in order to reassure the bond market that the incoming tax revenue situation will improve to help tackle the country’s seemingly insurmountable debt burden. Taxes are generally seen as inflation-negative, and therefore JPY-negative in a weak growth environment.

Japanese consumption as a share of GDP typically ranges between 57% and 60%, meaning a pullback in consumption for whatever reason – less disposable income due to diminishing purchasing power (inflation) or higher taxes – will have a significant negative impact on the economy and the Yen as more easing is weighed.

The key pairs to watch are AUDJPY and USDJPY.

Durable Goods Orders are an important barometer for US consumption, which constitutes roughly 70% of GDP. Typically, consumers hold off on buying durable goods during poor economy conditions; thus, improved orders suggest confidence among American consumers with respect to their future financial security.

In context of wavering consumption trends in recent months and the decline in business and consumer confidence ahead of the US fiscal deadlock that occurred in early-October, it is likely that high-end capital expenditures suffered amid the cloud of fiscal uncertainty. Improvement is expected in the headline figure relative to August’s meager +0.1% monthly expansion; though US Dollar weakness may arise if the forecasted +2.0% monthly figure isn’t achieved.