- Inflation data from Europe and the US important for short-term growth.

- QE3 taper: likely to happen on Wednesday, but only a minor step down of $10B.

- QE3 taper: Fed will indicate drawdown of QE3 will gradual, not in measured, successive moves.

Since the June 19 FOMC meeting, all eyes have been looking down the calendar to September, when market participants determined it was most likely the Federal Reserve would slow down its QE3 easing program. After three tense months, the September FOMC policy meeting finally arrives this Wednesday.

There are two main factors for this coming policy meeting (which are discussed below). Ultimately, as has been the case over the past several months, the risk to the US Dollar lies in Treasury yields – that is, should yields fall back from their recently elevated levels, the recent downswing in US economic data exposes the US Dollar for a steeper decline.

Risk on the calendar elsewhere shouldn’t be dismissed. There are several inflation data due, with careful attention being paid to incoming European data given the recent turnaround in short-term growth prospects (inflation being a sign of increased economic activity). Finally, after the Fed’s fireworks on Wednesday, the secondary major currencies should see some extra volatility with the 2Q’13 New Zealand GDP report due and the Swiss National Bank Rate Decision. 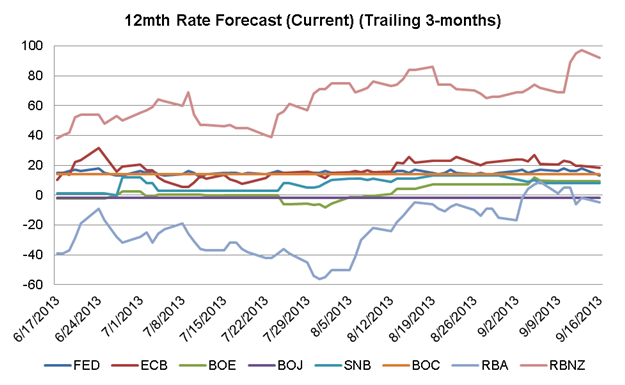 Inflation has been running well-above the Bank of England’s +2% yearly forecast for several years, and the recent upswing in economic growth prospects raises the profile for sustained elevated price pressures. However, with Governor Mark Carney implementing forward guidance in order to tether market rates low for the next few years, there are signs that consumers are adjusting their expectations.

Despite the improved growth figures, August inflation is seen lower to +2.7% y/y, but the revision higher in the core up to +2.1% y/y should insulate any downside in the British Pound. With the ‘circuit breaker’ for forward guidance set at +2.5% y/y in the 3Q’15, sustained higher levels of inflation in the interim should keep Gilt yields supportive of a stronger British Pound.

Unlike in the United Kingdom, where inflation has been persistently above target, price pressures in the United States have been underperforming the central bank’s preferred +2% yearly pace. With jobs growth slowing in the summer months, the US CPI reading is seen to step back from +2.0% y/y to +1.6% y/y, which would confirm the slowdown in economic activity.

However, the core reading is seen edging higher by one-tenth of a percent, suggesting that the swing lower seen in the headline is only transitory. (A glance at energy markets confirms that non-core price inputs are more volatile.) Accordingly, only a miss on the expected readings will result in US Dollar weakness; otherwise there is little risk for too negative of a reaction.

The Federal Reserve will reduce its QE3 program by $10B, cutting US Treasury purchases to $35B from $45B, while holding MBS purchases at their current pace of $40B, according to a Bloomberg News survey. As speculation has arisen over the September taper the past few months, US yields have risen sharply: the 10-year note yield peaked above 2.900%, its highest level since August 2011.

Whether or not US yields can stay elevated after Wednesday will be the major determinant of US Dollar price action going forward. A reduction greater than $10B would help keep the buck elevated. Assuming that only $10B will be taper, there are two main points to watch for at Chairman Ben Bernanke’s press conference.

First, what will be the schedule to taper QE3 further? Concerns of a 1994-esque bond market meltdown – caused by the Fed’s successive rate hikes – are lingering in policymakers’ minds. As such, to prevent rates from backing up too quickly, the Fed is likely to underscore the idea that any further tapering will be contingent on incoming economic data and therefore, will unlikely be linear in nature.

Second, what is the Fed’s view on the US economy? The Fed will update its growth, inflation, and labor market forecasts, and a way to implicitly keep policy loose/easy (“dovish”) will be to downgrade the US economic assessment (thereby suggesting that accommodative policy could be in place for longer).

Read more: US Dollar Set for Explosive FOMC…But Does it Rally or Collapse?

Emerging markets and Asia may be showing signs of slowing down but that hasn’t weighed greatly on the New Zealand economy. True, the economy may have grown at a slightly slower pace at +2.3% y/y in the 2Q’13, but traders are pricing in the first Reserve Bank of New Zealand rate hikes in 2014; and traders are the most bullish on the New Zealand Dollar since August 2011.

With the report due out several hours after the Fed’s meeting, the Kiwi is likely to see heightened volatility regardless of the outcome. Best case scenario: a small Fed taper; dovish guidance, and a beat on New Zealand GDP could see the NZDUSD on its way towards $0.8500.

The SNB’s monetary policy has largely focused around maintaining the EURCHF floor at Sf1.2000.since September 6, 2011. While the floor has stemmed safety capital flows into Switzerland, there’s little reason to think that policy will be adjusted anytime soon in light of only a mediocre flow of incoming economic data (inflation, industrial production). As such, we suspect the SNB will take a cautiously optimistic tone when discussing regional economic prospects, but will steer far clear of suggesting that policy will tighten soon.

The key pairs to watch are EURCHF and USDCHF.