- US NFPs on Friday last major labor update ahead of September 19 FOMC meeting.

- US NFPs on Friday will determine weekly performance for most of the majors.

It’s the first full week of September and after a calming of tensions over Syria and signs that global growth prospects are starting to turn around – especially for the Euro-Zone and the United Kingdom – has paved the way for a strong start for risk-correlated assets.

With the summer doldrums ending, we expect investors to ease their way back into markets over the next week, which should give rise to relatively higher volatility amid a super-saturated economic docket.

Of note, there are four central bank meetings beginning with the Reserve Bank of Australia on Tuesday and ending with the European Central Bank on Thursday. While these meetings should provoke swift price action, all eyes are truly on the US labor market report for August, due this Friday. 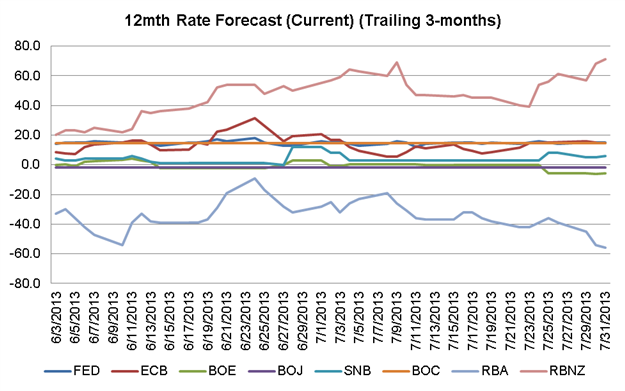 The Reserve Bank of Australia cut its key interest rate by 25-bps to 2.50% at its last meeting, but the Australian Dollar rallied nevertheless as the policy shift was largely priced in. Indeed, ahead of the announcement, the swaps market began pricing in a small chance (<10%) of a 50-bps. Accordingly, with the RBA signaling that its rate cut cycle could be coming to an end – contingent on incoming data – the Aussie perked up.

Will a hold this time provide a good reason for the Aussie to rally? Swaps markets are only pricing in a 17% chance of a 25-bps cut; and if the RBA shifts its tone more dovish in light of recent developments, the Aussie is vulnerable for another tumble.

The key pairs to watch are AUDUSD and AUDNZD.

The Bank of Japan will release its monetary policy statement on September 5. Note that there is no specified time for this release. Following the rate decision, BoJ Governor Kuroda will detail further monetary policy considerations in a press conference. Speculation has arisen that the recent turn in the Japanese economy could provoke the BoJ to upgrade its assessment of the economy; which in turn would be a signal to the Japanese government that the economy could handle a sales tax increase. In the event of an upgraded assessment, expect the Japanese Yen to pullback on concerns that the BoJ might feel more stimulus is necessary.

The key pairs to watch are the AUDJPY and USDJPY.

New Governor Mark Carney has done an awful job promoting his dovish stance, with UK yields rising steadily since mid-July (the 10-year Gilt yield is up from 2.290% to as high as 2.841% at the time of writing (the highest since July 2011)). It will be difficult for Mr. Carney to revive his dovish credentials in the face of dramatically improving UK economic data. We may very-well see another selloff ahead of the rate decision and rally thereafter, as we have seen after each of the past two major BoE events the past month (see this and that).

The key pairs to watch are the EURGBP and GBPUSD.

Credit growth was a main concern for ECB President Draghi at the last post-meeting press conference, despite signs that growth had turned higher (it has, and credit growth remains weak). Indeed, a look at Euro-Zone excess liquidity shows that capital levels have fallen back to pre-LTRO1 levels, which of course precipitated liquidity injections totaling over €1 trillion beginning between December 21, 2011 and February 29, 2012. If President Draghi continues to stress weak credit growth and a stagnant labor market, the Euro should depreciate amid speculation that another LTRO-type policy could come into play down the road.

The August US labor market update will be the most important one of the past few months. With the July Change in Nonfarm Payrolls report missing expectations by a fair amount, increased scrutiny now falls on the August print as investors try and determine what the Federal Reserve will do at its policy meeting on September 19, given the implications for the September taper.

Accordingly, near-trend labor market growth will be required at a minimum to keep the US Dollar supported; a significant miss on the headline (<+162K, last month’s print) could provoke a deep retracement in US yields. As such, we are looking for a print >+190K and Unemployment Rate <7.4% to confirm the September taper in the neighborhood of $15B/month, which would be particularly USD-bullish against the safe havens.