This week best exemplifies the notion of ‘the dog days of summer’: there are only six events ranked as “high” on the DailyFX Economic Calendar; and there are nearly half as many total events on the docket this week compared to next. While we won’t be looking to the calendar then for catalysts for volatile price action, there are four things to consider for the week ahead:

1) The Japanese elections and the Japanese Yen: the Yen is moderately stronger to start the week after Japanese PM Abe failed to secure an outright majority in the upper house of the legislature.

3) The Euro’s strength despite issues from…everywhere: Chief Currency Strategist John Kicklighter focused on this theme in the Euro Weekly Trading Forecast, noting that when a currency doesn’t fall despite seemingly bearish headwinds, it tends to be a sign of impending strength.

4) Figuring out the Fed’s Game Plan: Fed Chairman Bernanke attempted to reassure market participants over the path of QE3 but the uptick in US economic data has buffered dovish reverberations from sinking the US Dollar by too much in the near-term. However, as Quantitative Strategist David Rodriguez warns, it’s best not to “fight the Fed.” 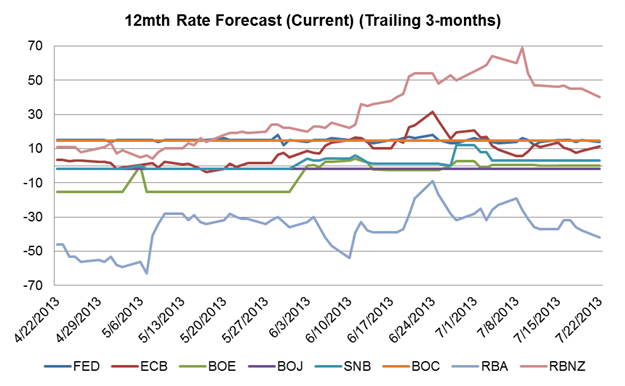 Annualized inflation has been contained between +2.0% to +2.5% since mid-2012, well-within the RBA’s medium-term target of +2.0% to +3.0%. However, price pressures have been biased lower, as growth struggles amid a contracting labor market. In the July Minutes, the RBA noted that “the inflation outlook, although slightly higher because of the exchange rate depreciation, could still provide some scope for further easing, should that be required to support demand.” A miss here would all but cement a rate cut in August.

The key pairs to watch are AUDJPY and AUDUSD.

On Wednesday, the RBNZ will keep its benchmark interest rate at a record low of 2.50%. The decision to change the Official Cash Rate must take into account a 14-year low inflation rate of +0.7%, an overheating housing sector, and a stale global export market. Credit Suisse Overnight Index Swaps indicate a 40% chance of a 25-bps rate hike in the next twelve months. During the RBNZ”s last meeting in June, Governor Graeme Wheeler stated, “Given [the] outlook, we expect to keep the OCR unchanged throughout the end of the year.”

The headline 2Q’13 UK GDP figure is expected to improve to +1.4% y/y, according to a Bloomberg News survey, in what would be the highest y/y growth rate since the 1Q’11. The UK economy has shown signs of improvement lately, with strong retail sales, an improving labor market, and higher inflation as per recent May and June data. However investors may worry about Thursday’s print because GDP prints have missed expectations the last two quarters; and the divergence between the May/June Industrial and Manufacturing reports relative to the PMI surveys covering the same period add to this indecision.

A significant miss in Thursday’s GDP may ignite BoE to introduce further dovish policy, although the BoE unanimously voted to maintain current policy under Governor Mark Carney’s first meeting. A beat here could spur the British Pound to become the top performer on the week.

Durable Goods Orders are an important barometer for US consumption, which constitutes roughly 70% of GDP. Typically, consumers hold off on buying durable goods during poor economy conditions; thus, improved orders suggest confidence among American consumers with respect to their future financial security. In context of stronger consumption trends in recent month and the miss on the June Advance Retail Sales report, a modest positive reading should be anticipated, but below the headline forecast, which could lead to a marginally weaker US Dollar.

Japanese CPI data will be closely watched as an indication of the progress of Abenomics. In April, the BoJ announced aggressive monetary easing via doubling the monetary base over two years. Japan has struggled with deflation for many years, which has disincentivized consumption spending and handicapped any economic recovery. A Bloomberg News survey shows a yearly prices increase of +0.2%, which would be the first positive inflation reading since July 2011 and could prove to be bullish for the Yen. With Abenomics here to stay for the foreseeable future in light of the election results, a miss on the figure could reignite BoJ easing concerns.

The key pairs to watch are AUDJPY and USDJPY.