While the economic calendar this week is more saturated than that of the past week, the diversity among major data prints is nonexistent. Of the events ranked as “high” by the DailyFX Economic Calendar, nearly half of major data this week is inflation related, with Canada (Friday), the Euro-Zone (Tuesday), the United Kingdom (Tuesday), and the United States (Tuesday) releasing their June updates.

Certainly, the week started on a positive note thanks to the…relief…surrounding the 2Q’13 Chinese GDP print. Although the headline annualized print of +7.5% came short of the +7.7% consensus forecast (and +7.7% model estimate), there had been growing chatter the past week or two that a print near +7.0% should be expected; needless to say, the report can be viewed as somewhat positive in that regard.

In light of these events, it is possible that in the face of soft inflation figures and relief around China, that the commodity currencies retake some of their recent sharp losses against the European and North American currencies, with risks weighted for excess volatility given the fact that the important data this week is directly related to central bank policy. Speaking of which, Federal Reserve Chairman Bernanke takes to Capitol Hill on Wednesday and Thursday for his semiannual (and perhaps last) testimony in front of Congress – this very well may be the most important event all week. 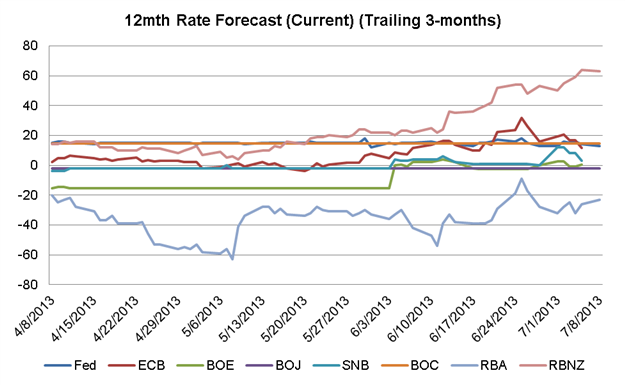 Consumption is the cornerstone of the world’s largest economy and the Advance Retail Sales report is the best proxy for consumption in the United States. Accordingly, with jobs growth starting to pick up, market watchers are intently watching to see if gains in the labor market translate into broader economic growth as the increase in disposable income circulates through the economy. As such, June sales were expected to have increased at a faster rate than in May, as well as over the three month average of +0.1% m/m. Accordingly, a beat here would imply a revision higher on the June NFP figure once the next labor report is released.

The Bank of England has kept its monetary policy unchanged for a year now, and its main interest rate has been pinned at 0.50% since March 2009 in an effort to jumpstart the economy. However, loose monetary policy has paved the way for higher price pressures ahead of strong growth, with the UK running the highest rate of inflation among the countries/currencies covered by DailyFX Research. Higher inflation has hurt the UK, as it not only has sapped consumers’ purchasing power (consumption accounts for 62% of headline GDP), but it has prevented the BoE from introducing further stimulus. With Governor Mark Carney now in the driver’s seat, it is likely that the only issue standing between him and more stimulus is higher price pressures; and the expected +3.0% y/y print would present an obstacle. The British Pound could benefit on such data.

Inflation tends to be an indicator of growth (albeit a lagging one) which is part of the reason calls for a continued recession in the Euro-Zone linger. Indeed, the +1.6% y/y forecast, in line with the prior month, is hardly a sign of strong growth, and fits in with the European Central Bank’s baseline scenario of “broadly balanced” and “anchored” inflation expectations over the medium-term policy horizon. With the ECB having just introduced forward guidance less than two weeks ago, the Euro retains proximal sensitivity on issues that might affect policy decisions; further weak inflation data stands to serve as a bearish catalyst.

The stronger US Dollar in the 2Q’13 helped insulate the US economy from higher rates of inflation, which is a major reason why consumers have stayed resilient despite the government’s austerity measures. But with aggregate demand increasing amid a steadily improving labor market, an uptick in inflation would be a welcomed confirmation that growth is starting to hit its stride. Accordingly, the recent bout of disinflation is likely to have ended according to forecasts compiled by Bloomberg News, with a slight two-tenths of percent uptick expected. Given the Fed’s insistence that recent softer inflation figures are transitory, a miss here could set back the US Dollar.

Fed Chairman Bernanke will take to Capitol Hill on Wednesday and Thursday for his semiannual Congressional testimony on the state of the US economy and monetary policy. In what could very-well be his last testimony as Fed overseer (his term expires in January), Chairman Bernanke will retain his recent bias as exhibited from the June 19 policy meeting to last Wednesday’s comments at a conference in Boston: the US economy is doing good, not great; the labor market has improved but isn’t where it should be; and US monetary policy needs to remain accommodative in the face of restrictive fiscal policy. Considering that the US Dollar took a dive when Chairman Bernanke made these comments to highlight the Fed’s intention to merely slow its pace of easing, not cut it off completely (taper versus tightening), it is very likely that the US Dollar trade nervously ahead of the Congressional fireworks midweek.