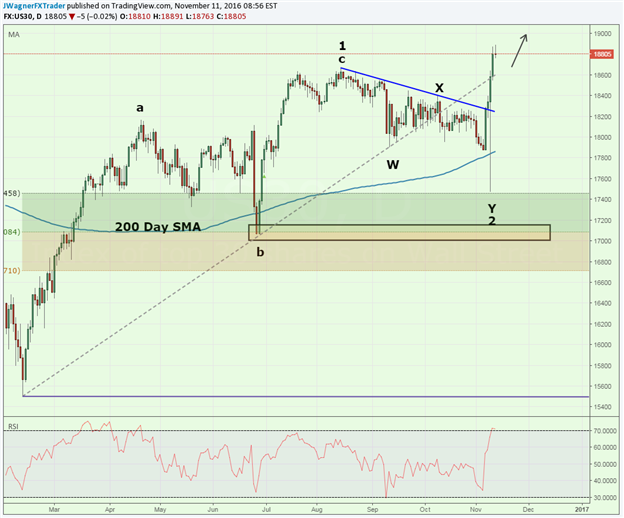 -Pattern remains bullish while prices are above 17,000

Dow Jones Industrial Average (DJIA) has embraced the Trump presidency rallying to new all-time highs. What started off as uncertainty, rebounded in optimism as there is no longer a question of who the next president is.

Was this move to all-time highs the start of a new bull trend?

It is possible. The overnight dip that took place on Wednesday morning was shallow as it held above our 17,000 target. However, the sell-off was deep enough to qualify as complete opening the door to a new bull run.

The two competing Elliott Wave counts we’re entertaining are noted below. The bottom line is that we are slightly favoring the first and more bullish view because the recent DJIA move has been strong. In an idealized pattern, the slope of the move higher for the flat is too steep and therefore is considered slightly lower in probability.

As you can see from both patterns, they suggest a bullish move higher that has already begun, or is likely to begin after another dip lower.

The rest of this article will be technical in nature. If you wish to read our Q4 outlook for equities, grab a copy here.

Or, if you wish to join Jeremy in his Monday 9;30a ET US Opening Bell webinars to discuss this market, register and join here.

The primary interpretation of the technical pattern is that we are in the midst of a wave 3 higher. This wave pattern suggests much higher prices that likely break 20,000 in the coming weeks. Since wave 1 was a zig zag that implies wave 3 would need to carve out as a zig zag as well.

One possible alternative is the pattern is in the ‘B’ wave of a flat correction. This suggests prices eventually sell off back towards 17,500 and possibly lower. So long as prices are below 19,120, we must keep our minds open to this is a possibility.

As mentioned above, we view this as slightly lower probability because the move beginning November 9 was quite steep which is uncharacteristic of a ‘B’ wave. 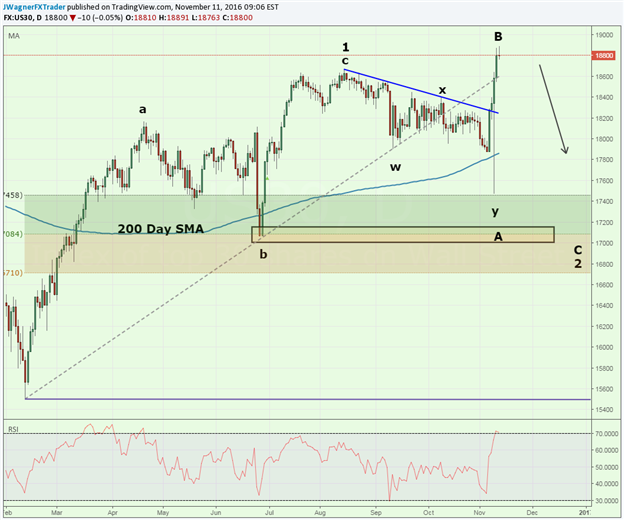 Bottom line, so long as prices are above 17,000 the medium to long term bullish trend remains in force. It then becomes a question of whether wave 2 ended this week or after one more dip lower.