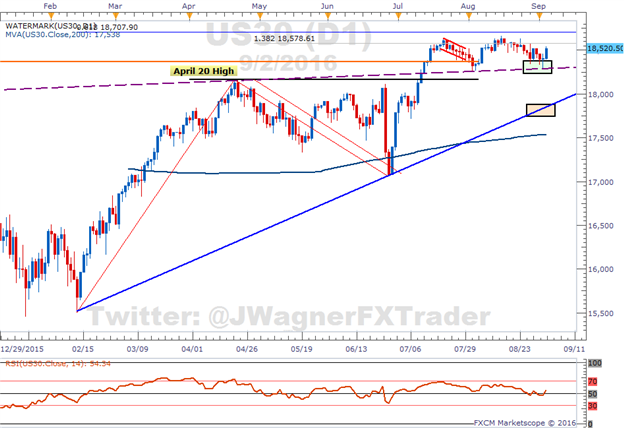 -DJIA dipped to 18,300 support; a breakout higher resumes the up trend

Dow Jones Industrial Average shot higher on the heels of US job growth coming in below expectations. US Non-Farm payrolls increased +151k which was below expectations of +180k. Though the market participants were expecting stronger job growth, DJIA applauded the report.

You see, the Fed has been talking up the potential for a rate hike in 2016 and possibly later this month. Pursuant to the Jackson Hole meeting last week, rate hike probabilities for September witnessed through the Fed Fund futures drove higher from 28% up to 40%.

In Wednesday’s report we wrote:

“[A] weak or expected reading becomes a thorn in the side for the Fed and DJIA may see a rate hike as something to be concerned with later and not now. Just like what we saw with Brexit, if the perceived event risk is several months off into the future, then the market tends to find something else to focus on in the near term.”

With a weaker print on the job increases, market participants now believe the rate hike is another discussion for another day.

From a technical perspective, we laid out a couple of potential support zones in Monday’s report of 18,300 and 17,800. With yesterday’s dip to 18,295, it is possible that a breakout higher may signal a continuation of the uptrend. The medium term forecast is still bullish towards 19,700.