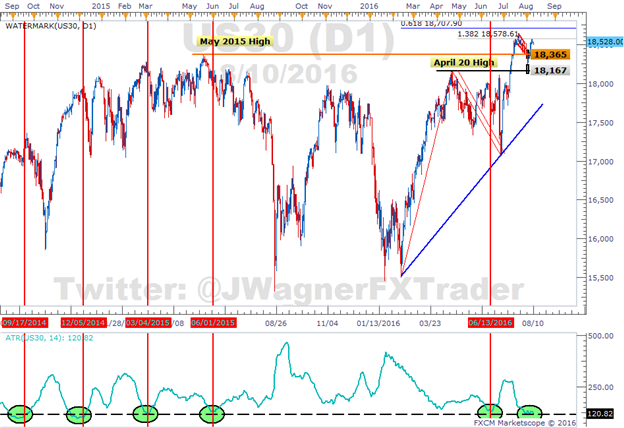 -Below 17,800 would force us to reconsider the higher probability technical patterns

As we’ve stated before, the medium term outlook for DJIA is towards higher levels. However, the low volatility environment suggests sideways to lower trading in the shorter term. Therefore, we’ll look to lower levels to buy the dips.

Looking back at historic ATR values on US30, a CFD which tracks the DJIA, there were 6 instances that levels were near current readings. In 2014, the low volatility readings lasted for a month before volatility picked back up. So low ATR readings does not inherently suggest higher readings tomorrow.

Sometimes, prices would shoot higher to be followed by a sell off. In essence, it was a false break higher like in September 2014 and June 2016. Most of the sell offs were around 4-5% except for June 2015 which was much larger at near 15%. Keep in mind that this is limited scope of just 6 previous occurrences of similar volatility levels. What happened for these 6 instances is no guarantee that future occurrences will be the same.

A dip in prices would still fit the medium term bullish patterns. A dip below 17,800 would cause us to reconsider the higher probability patterns. Above 17,800, we’ll look to buy dips towards 19,700 and possibly higher levels.

Do your losing trades overshadow your winning trades? Learn about the psychology behind why that might be happening in our Traits of Successful Traders research.