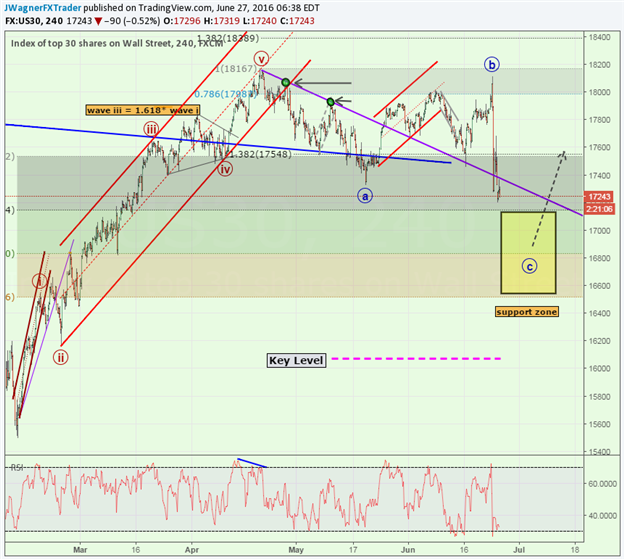 -DJIA technical picture remains bullish for the time being

-Considering buying a dip above 16,500 in the void of program selling

In the wake of the Brexit vote calling for UK to leave the EU, global equities remain shaky as uncertainty pervades the market. While the European politicians sort through how to make the divorce happen, the market is left to ponder how messy it could be and what skeletons may be hiding in a closet. One such skeleton could be the fear of forced selling resulting from program investors adjusting to the increased volatility. Typically, as volatility increases, trade sizes decrease meaning algos might pare back their current positions. This forced selling continues the cycle of increased volatility. Though we don’t know if the volatility will continue, it is a risk to be mindful of.

Prior to the vote last week, we were considering a short position on ensuing rallies with an initial target towards 17,300. US30, a CFD which tracks the DJIA, is sitting in the zone of 17,300 with a current print of 17,250 as we write. So, what is next?

In times like these, it is important to take a step back and as best as possible, wipe the name off the chart and see what technical patterns may be evolving. As traders, we inherently bring a bias as to which direction we think US30 “ought” to go based on how we’ve processed the communication of what a Brexit means. Therefore, we need to neutralize as much of our bias as possible.

As we look at the technical picture for US30, one thing sticks out. We are only a few points off all-time highs. In fact, from the February 11, 2016 low to Friday’s close, US30 hasn’t retraced 38% of the previous uptrend which is quite shallow. I can appreciate how going into the vote, traders were expecting a “Bremain” and equities may have been bid up. However, the surprising Brexit result merely peeled away a couple of percentage points and the technical picture remains bullish for the time being.

In summary, these next couple of days will help set the mood. Technically, the picture is still bullish. Therefore, a void of program selling supports buying at cheaper levels. However, if program selling kicks in, that selling could spark another round volatility.

Holding above the February 11 low of 15,503 is critical to the bullish outlook. Below 16,070 will begin to show cracks in the bullish foundation. Below 16,070 could be an early warning signal of even deeper losses coming. Otherwise, consider buying dips above 16,500.