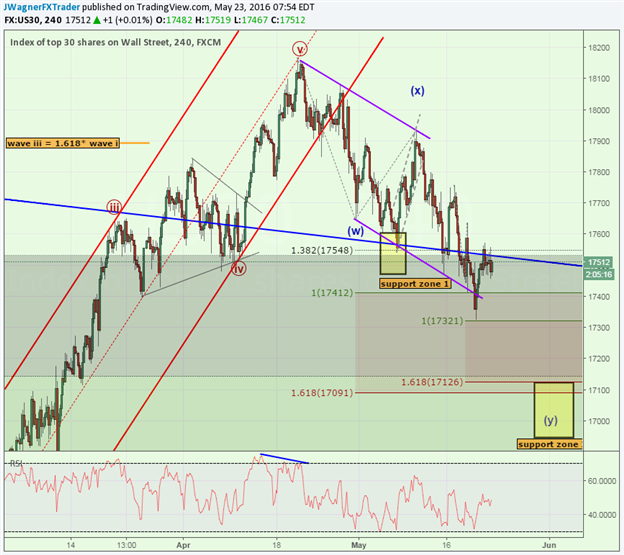 After a soft close on Wednesday (the day Fed minutes were released), Dow Jones has traded sideways despite the hawkish tone by the Fed. DJIA has traded in a tight range since and finished the week at 17,500. This appears to be a continuation of the market’s calm response to the Fed’s hawkish tone. Though Fed Funds futures are pricing in a greater probability of a rate hike over the summer when compared to a week ago, the corresponding probabilities are still less than 50%.

Therefore, the markets still haven’t fully bought into a rate hike within the next 9 weeks which is capping any significant sell off for the moment. On this Friday May 27, Fed Chairwoman Janet Yellen holds up the podium as many ears will be listening for a change of tone or some indication that a June or July hike could become more prevalent.

We began talking on May 6 about a correction lower in US30, a CFD which tracks the DJIA, whereby this correction is likely to chew up time more so than price. The technical structure of price action since the April 20 high is corrective with overlapping 3 wave moves lower.

The good news about such a structure is that its resolution points to higher prices which is consistent with the market’s current disbelief of a summer rate hike. We are now about 5 weeks into the correction that began on April 20 so it’s possible a trading bottom forms over the next few weeks.

We have discussed in the past how the technical picture appears to paint a drift lower of prices into support zone 2 which is near 16,900-17,144. We will look for prices to grind lower and see how prices react in this support zone.

For the time being, patience is the key while we look for a buy signal in the above cited support zone. If prices break above the purple resistance line, then we’ll reconsider the probability of the tradeable low being in place. A bullish trader may consider a long position on a break of the purple trend line as that would indicate a shorter term change in the mood of the market. 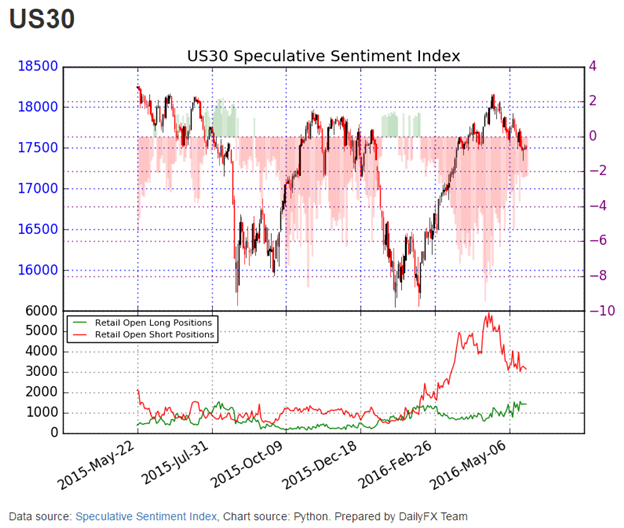 Regarding sentiment, the Speculative Sentiment Index shows the number of short positions and long positions have been dissipating over the past week. For a sideways correction in price, the reduced interest in trading shows traders are getting shaken out of their positions which is what a correction intends to do. If we begin to see short traders re-enter the picture, especially if price is in the support zone 2 or upon breaking the purple trend line on the price chart, then it could be indicative the tradeable low is at hand.

Learn more about Speculative Sentiment Index with this 5 minute video.

The above is a shorter term forecast for Dow Jones. If you are interested in our Q2 2016 equities forecast, download it here.

CAC 40 Fails to Make a Significant Change in Price