-Dow Futures sell off after a weak Non-Farm Payroll report

-Though a bounce is likely, medium term bulls may want to patiently wait for lower levels near 17,000

The April jobs report in the US disappointed with a +160k print which sent Dow Futures down in the minutes following. Though the Non-Farm Payroll report was less than +200k expected US30, a CFD which tracks the DJIA, is now entering one of the support zones described on Wednesday.

There are 3 different types of analysis supporting this zone.

Now that we are in this zone, let’s look at the structure and determine if it holds or whether we trade down to the support zone 2 mentioned Wednesday.

The structure lower from April 20 appears to be corrective in nature. That would give the bulls a wind to their sail in anticipating higher prices down the road.

However, this current correction lower has only minimally retraced in price and the retracement has been shallow in time. Therefore, look for lower levels such that a deeper retracement will eat up price and time. Or, consider that price may trade sideways simply eating up time.

Therefore, we consider it higher probability that price will eventually dig lower to the support zone 2 listed in Wednesday’s report. 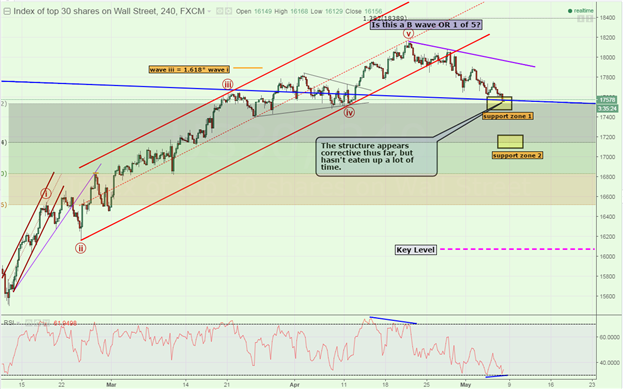 Though we are anticipating price action in the US30 to dig into 16,900-17,100, it would not be out of the realm of possibilities to see US30 trade up to 18,340 and still be within the bounds of the sideways “time eater” described above.

There is enough support in the current zone near 17,570 that a bump higher could be anticipated for shorter term traders. For the medium term bulls, the better risk to reward ratio opportunity is at lower levels described on Wednesday.

The above is a shorter term forecast for Dow Jones. If you are interested in our Q2 2016 equities forecast, download it here.

We studied millions of live trades and produced a Traits of Successful Traders Research. Learn these discoveries with a free download.