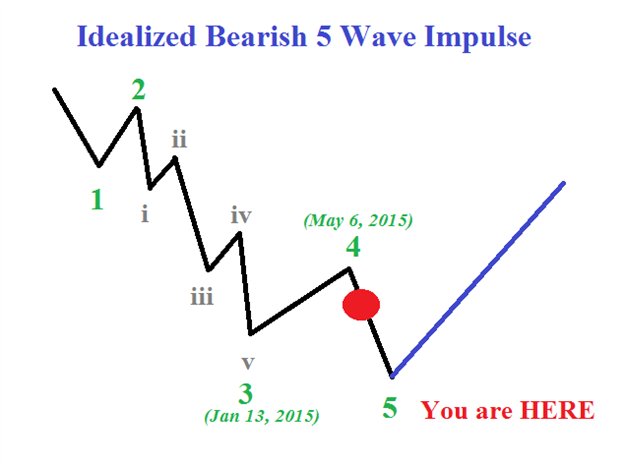 With negotiations continuing on Greece today, the collateral effects of a Grexit is taking the toll on Crude Oil (CFD: USOIL). Today was the largest down day since March 27 as prices test the support level created by the March 26 high.

Over the medium term, we look for this support to break as two different Elliott Wave pictures paint a deeper sell off to below $45.

For those unfamiliar with Elliott Wave Theory, wave counts are probabilistic in nature and the two scenarios below are considered the higher probability options, though other scenarios exist.

The two scenarios discussed below are:

The price action from May 6 to June 24 has been incredibly messy. When cutting through the sub-waves of this period, we see the potential for a wave ‘i’ down (impulse) followed by a wave ‘ii’ expanded flat correction that ended on June 24. That means we are likely in the midst of a wave ‘iii’ lower.

(Click on the chart to zoom in; after zooming in, press the play button towards the right to set the market in motion since the chart was created)

So long as prices stay below the May 8 low of 58.11, this interpretation remains valid as we look for lower highs and lower lows to continue to build.

There is another higher probability scenario that we’re following which is a downward flat correction. It would carve out in 3 waves down and it appears we have the first two waves already finalized. The 3rd wave (‘C’ wave) should sub-divide into 5 waves. We may be in the midst of the 3rd wave of that 5 wave sequence. This flat correction should retrace a heavy portion of the previous uptrend which could take the instrument down to $41-$45.

In the chart image above, the downward flat is identified with the alternate labels. The image below is the idealized pattern and we are located now, if this is the pattern at play. 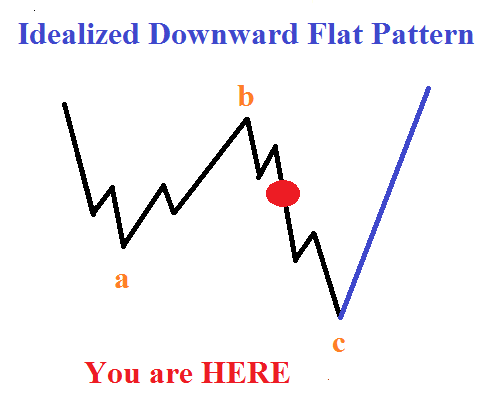 For the past week, the sell-off has been relentless. That type of long and strong move corresponds to a 3rd wave. Both wave counts show we could be in a 3rd wave of some sorts.

So long as we remain below $58, both resolutions to below $45 ought to be respected.

Other wave counts (press the PLAY button towards the right of the chart to see market movement since the analysis was made):

How Much Juice is Left in USDJPY Bulls? (Daily Chart – June 9)

Make sure to join me Monday mornings at 9:30a ET inside the DailyFX Plus Live Classroom for the US Opening Bell webinar [free registration]. In this webinar, we analyze the major FX pairs and CFD products like USOil using Elliott Wave technical analysis.

Want to follow the Elliott Wave analysis on the EURUSD beyond the news event? You have the ability to copy my charts above so they appear on your desktop exactly as shown above. Email me at jwagner@dailyfx.com if you wish to receive instructions on how to do so. Feel free to comment on the chart with your views.