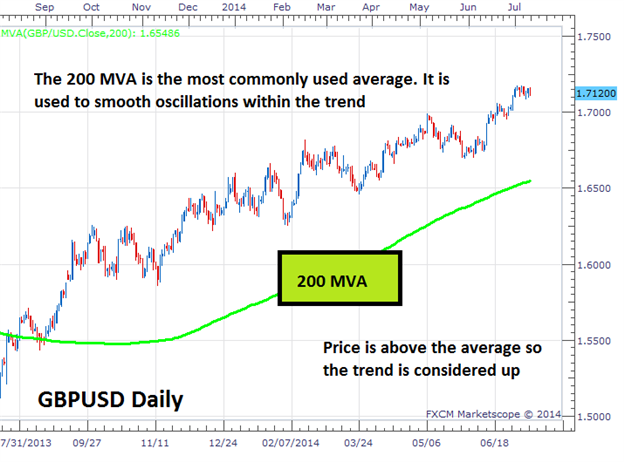 Simple Moving Averages (MVAs) are considered to be some of the most versatile and widely used indicators across markets and time frames. Typically, MVAs are used for filtering price action, as well as planning potential market entries. Today, we will continue our look at moving averages and review how they can be used for timing market entries. Let’s get started!

MVAs and the Trend

If you are unfamiliar with moving averages, don’t worry! These indicators operate exactly how they sound. Moving averages by design average out the closing price for a specific number of periods on the graph. For instance the 200 period MVA will add up the closing price for the last 200 periods, and then divide out that sum by 200. The indicator calculates the average for the trader, and then plots the point on the graph as a frame of reference.

A few of the most popular MVAs used in markets are the 10, 50, and 200 period averages. Depending on the number of periods selected, these MVAs will become more or less sensitive to changes in price. Normally, because longer term MVAs are less sensitive to any individual price change, they tend to be used as trend filters. If price is below a longer term MVA, the trend may be considered down. In the case of the GBPUSD chart seen below, price is above the 200MVA, so the trend may be considered up.

Once the general direction of the market is decided, traders can begin adding a series of shorter term MVAs to decide their market entries. As stated above, the 10 and 50 Period MVAs tend to be popular choices for this task. Traders will look for the shorter term 10 period MVA to cross ABOVE the 50 period MVA to trigger a buy signal in an uptrend. Conversely, traders will look to sell a downtrend when the 10 crosses below the 50. Let’s continue our example on the GBPUSD to get an idea of how this works.

Below, we have a daily GBPUSD chart. The trend has been filtered with the 200 MVA, but this time we have included a shorter period 10 and 50 MVA as well. Since the trend is up, traders will look to buy the market when the 10 period average passes above the 50.This process can be replicated as long as the primary trend stays in place! 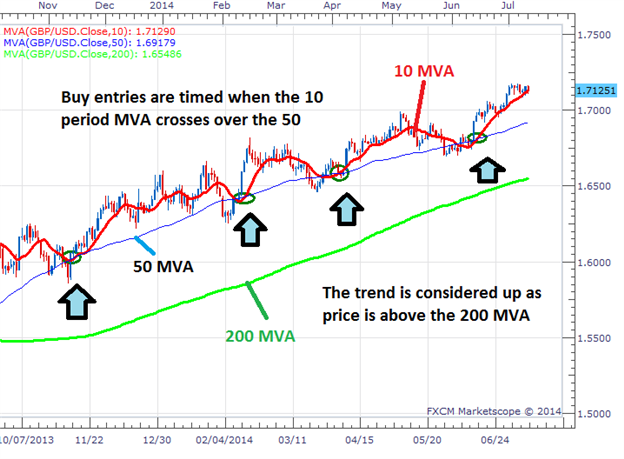 Timing market entries is just one of many ways you can utilize the Moving Average in your trading! To learn more about MVAs, sign up for the DailyFX Moving Average Trading Course. Registration is FREE, and the course includes video as well as checkpoint questions to test your knowledge. Get started using the link below!

Register me for the “Trading with Moving Averages, Strategy Course”