“We’re in the business of making money, not creating an ideal wave count...”

There is a lot of allure to having the market perfectly mapped WITH AN thorough Elliott Wave count. However, the Elliott Wave principle brings a lot of people under something called hindsight bias. Hindsight bias, is the mental bias that hurts traders where they look back on a completed price chart and feel that they were more predictable than they really are in real time.

The Benefits of Elliott Wave

Few tools are as helpful in allowing you to put the context of a current market move into an overall trend like Elliott Wave. The concept is that in freely traded markets, human behavior will often act in 13 repeatable patterns. The analysis of these patterns will allow you to look at the possibilities of upcoming price action probabilities.

Having a probable understanding of price action probability is a huge benefit. Another benefit is that Elliott wave can help you time the market by recognizing likely end points of a counter-trend move, also known as a correction. Lastly, through the use of Fibonacci tools, Elliott traders can forecast potential price targets which are great for knowing when to get out of an uptrend on strength.

The Characters of Each Wave (New Bull Trend Example)

To help you see what the common character of each wave is, here is a quick description of each of the 8-waves. The purpose of this is so you will know with higher probability, if you’ve labeled the charts correctly so that you can anticipate the next likely move. After this breakdown, you will see how we can use MACD to clearly recognize Wave 3 so that you can pinpoint corrections.

Wave 1: Basing move, price is moving higher even with bad news, seen as noise off the trend

Wave 3: Most Powerful wave and where you’ll learn to begin your count soon. Very strong.

Wave 4: Corrective Wave that will be different than Wave 2 and stall excitement of Wave 3.

Wave A: Key correction, will tip you on what type of correction to expect, can be 5 or 3 waves

Wave B: Known as the “Suckers rally”, fake return of prior trend which fails to Wave C

This is the most helpful Elliott Wave lesson I’ve learned and it’s thanks to Constance Brown in her book, Technical Analysis for the Trading Professional. The concept that she did a great job of recognizing is that the third wave of an impulse is easiest to see via an oscillator. She is a whiz with RSI and usually works with that oscillator but MACD also does a very good job of clearly showing you a third wave whether in a bullish or bearish trend 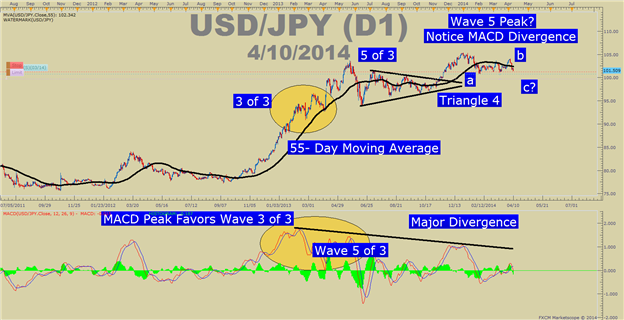 In the end, you’re really looking for MACD peaks and MACD divergence to clarify the Elliott Wave count. You don’t have to have the perfect count, which should be a relief as it was for me. You simply need to identify the 3rd wave of Wave 3 with the largest peak and then use divergence to identify wave 5. Once those are identified, you’ll be in a position to trade the turn or the resumption of the trend.