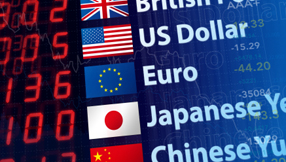 Understanding candlestick charts continues to be the backbone of price action analysis for the Forex market. Oncetraders understand the basics, they can then begin to compile a series of candles to form patterns to confirm potential changes and market direction. One of the most used candle patterns is known as the Harami. Today we will review the Harami pattern and how it can be implemented into your trading strategy. 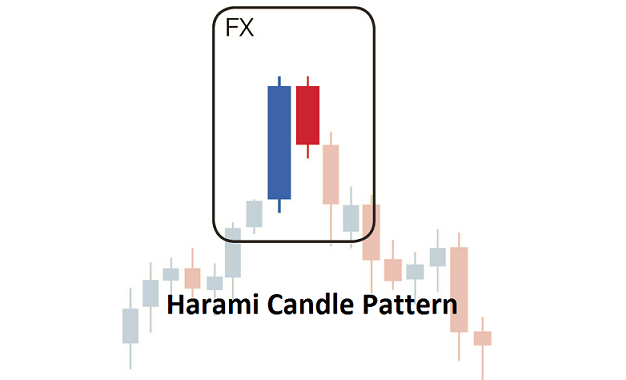 The Harami candle pattern may be new to some but for many it may already be known as a derivation of an “Inside Bar”. Pictured above we can see a traditional Harami which can be defined by a few distinct characteristics. First the Harami is comprised of two candles. The first candle shoulddepicta large bullish candle such as a bullish engulfing candle. This blue candle is then followed up by a second smaller candle. The key to identifying a Harami is to have this second candle not close outside of the previous candles body. To add validity to the pattern, the second candle should close above half the traded value of the first candles body.

A bearish Harami will show a bull market stopping dead in its tracks as in the example below. However, these patterns can be considered weak, because even if the pair pulls back after a Harami it does not necessarily dictate a full market reversal. Because of this, the pattern often incorporates a third candle for confirmation, creating a Three Inside Down pattern.

Let’s look at a current example. 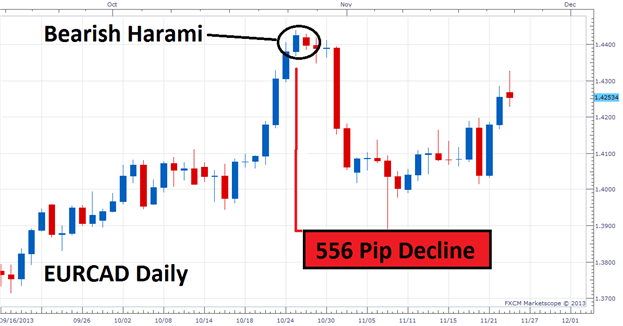 Above we can see a Bearish Harami in action on the EURCAD currency pair. The daily graph has been in a long standing established uptrend, but prices have a tendency to retrace along the way. This last retracement was started with the formation of a Harami. With its creation, the market put in its current high then quickly descended 556 pips to for a higher low on the chart.

Traders looking to take advantage of the Bearish Harami pattern can add it into any existing trending market plan. Traders can look to take profits on any existing long trades, or even consider trading a full out reversal once this pattern appears. Regardless of your trading plan, when adding new components to your strategy you should be tracking your results with a trade journal. This way over time you can gauge the effectiveness of price action and candle analysis in your trading.

If so, our Real-Time DailyFX on Demand is a fee-based service that gives you access to our professional trading staff from 6am – 2pm ET Every trading day so you can get clear feedback on your trade setups and ideas.