When comparing a currencies general trend against their 200 Simple Moving Average, this past week has seen the Australian Dollar drop two rankings. This drop represents a tie for the largest in the week (tied with the US Dollar).

Based on structural weakness seen in the Aussie and a rejection of the AUDUSD pair at the significant .95 price level, we think Australian Dollar weakness will return to the market.

There are a couple of news events that could spark a large move in the Australian Dollar.

First of all, US lawmakers are debating spending bills that if left undecided, could lead to a partial government shutdown of services. Then, US lawmakers have to additionally negotiate the debt ceiling on the US spending. This leads to uncertainty because more heat is being placed on the US economy to slow down the spending. This could impact other main world markets in Europe and Asia due to the size of the US economy.

Australia fits into this equation because they have strong ties with the Chinese economy. China is the biggest export destination of Australian goods. China is the largest importer into Australia. If the US economy reduces their spending, then China has less foreign demand for their products which affects their pull into Australia.

Secondly, Australia’s central bank, the Reserve Bank of Australia, releases their announcement on target interest rates Tuesday at 04:30 GMT. The RBA has been in a rate cutting mode for nearly 2 years now due in part to China’s slowing economy. Though the recent Fed ‘no taper’ announcement may lift emerging markets like China, the no taper signal indicates weakness still persists and that inflationary pressure may be tamed in US and China. Weak Chinese inflation means downward pressure on Australia inflation and rates. 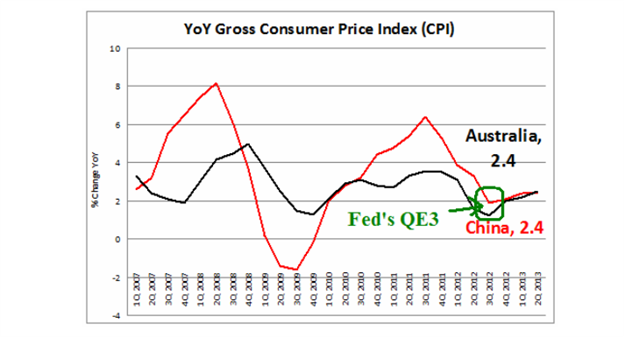 Notice in the chart above how inflation has remained muted in both China and Australia even on the heels of the Fed’s QE3 announcement from September 2012. All of that money printing didn’t improve much of the worldwide spirits and spending. Therefore, look for the positive effects of ‘no taper’ to wear off which could hurt the value of the Australian Dollar.

Last week, we highlighted Euro strength and purchased Euro’s through a basket of currencies. The position was slightly underwater but never hit the stop loss of 1.5%. We will keep that Euro buy currency basket trade open.

This week, we’ll add a short AUD currency basket trade. The stop loss will be 1.5% of the account balance and we’ll take profit at 3.0% for a 1:2 risk-to-reward ratio.

The currency baskets offer several advantages. Trading a currency rather than a pair is a good way to spread out and diversify your exposure. This way, we are selling the AUD against a basket of currencies allowing us to isolate the valuation of the AUD.

Gauging relative strength of currencies is a common method employed by traders of all skill levels. The analysis is fairly simple and straight forward as previously laid out in “Know the Strong and the Weak Currencies.” The process can take about 15-20 minutes and doesn’t need to happen but once or twice per week.

If you would like to learn more about using Simple Moving Averages in your strategy, register to take this free 20 minute “Trading with Moving Averages” course. You’ll learn how to use moving averages to detect trend and trigger signals.

Register here to start your learning.