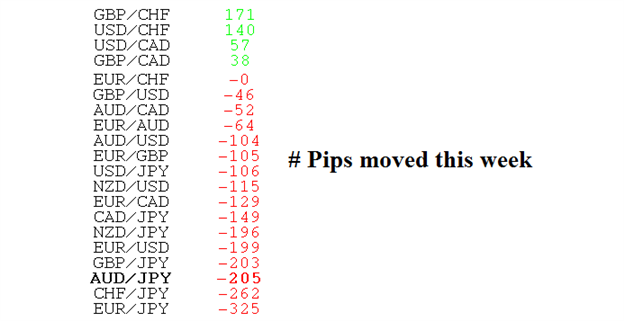 Article Summary: The Japanese began the week gapping towards weakness only to reverse. That weakness was short lived as the Yen finished strong as uncertainty revolving around sequestration remains. The AUDJPY broke a support trend line which indicates the potential for continued weakness in the pair.

Markets don’t like uncertainty. As the March 1 sequestration date approached, the uncertainty regarding growth of jobs in the United States held the markets hostage and created volatility. Market participants shuffled flows from risk assets towards safer assets including safe haven currencies such as the Dow Jones FXCM Dollar Index (ticker = USDollar) and the Japanese Yen.

Checking our currency heat map for the week, Japanese Yen crosses were the outperformers as each of the Yen pairs were showing the most pips lost. This means the Japanese Yen was a broad based winner. Today, we’ll focus on the AUDJPY as it approaches a resistance level offering us a good risk-to-reward ratio trade.

We wrote on January 25, 2013 about the correlation between the AUDJPY and the US equities market. (See “Using Equities and Japanese Yen Correlations”)

At the time of the publication, we wrote that stocks appear to be topping, but it was premature to sell the rally.

“Technical analysis shows the US equity market at resistance even though it is at 5 year highs. This resistant puts the stock market at risk of a significant correction. When applying the analysis to forex charts, wait for significant levels of support to break before selling the highly correlated AUDJPY.”

Until the upward sloping support trend line of the AUDJPY is broken, calling a top would be premature. On Monday, that support line was broken. Stocks have recovered but not with the vigor needed for a long lasting bull market. Likewise with the AUDJPY, it has recovered, but appears to be testing the underside of the previously broken trend line. This broken trend line will likely act as resistance in the future. 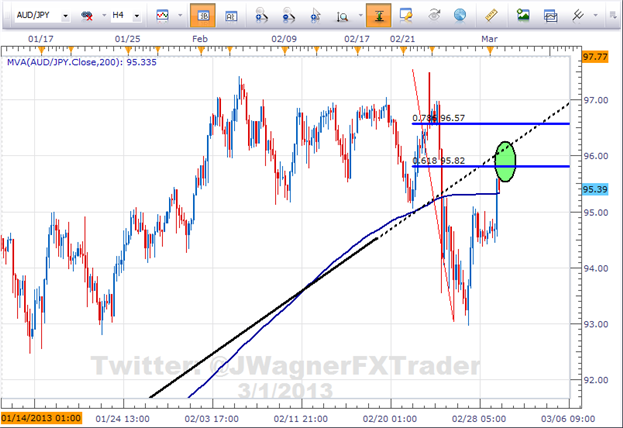 This test of resistance will offer an opportunity to short the pair and play on the emotion of sequestration and uncertainty that is evident in the market.

The resistance line currently rests near 96. If we place Fibonacci retracements on the chart, resistance applies all of the way up to 96.50 where the 78.6% retracement level is.

[To learn more about how to trade with Fibonacci in partial retracements, register for this free Fibonacci course that will take about 20 minutes to complete.]

Therefore, our opportunity is selling near 96 on a touch of this resistance line, while placing a stop above the swing high of 97.50. We’ll look to move our stop to break even on a break below 95.