One of the most awaited events on the economic calendar this week is the release of the unemployment numbers in Australia. While the event is not traditionally as volatile as NFP, these numbers are significant, and can give a trader insight into the strength of the Australian economy. As well, policy makers at the Reserve Bank of Australia (RBA) will be using this information to make future policy decisions.

Below we can see another chart, this time graphing Australia’s benchmark interest rates. This rate is set by the central monetary authority and can be used to heat up or slow down the Aussie economy. Through 2012 the RBA has taken expansionary measures lowering this rate down to its current levels at 3.50%. If unemployment increases more than expected, this may signal another potential round of rate decreases through the RBA.

Ultimately with expectations of a rate cut, it would be expected that the Aussie currency would decrease in value. To learn more, let’s take a look at how this policy has affected price for 2012.

Below we can see current price action on an AUDUSD daily chart and can better see the pairs decline. Since the RBA began lowering rates the pair has decreased as much as 1275 pips from its 2012 high residing at 1.0855. Over the past month however price has been rallying, with a line of support being held near 1.0150. Upon a negative outcome of employment numbers, traders should watch this point for a potential breakout. With the formation of lower lows, it is expected that the AUDUSD downtrend may begin again with the potential to challenge previous lows set at .9580 on June 1st. 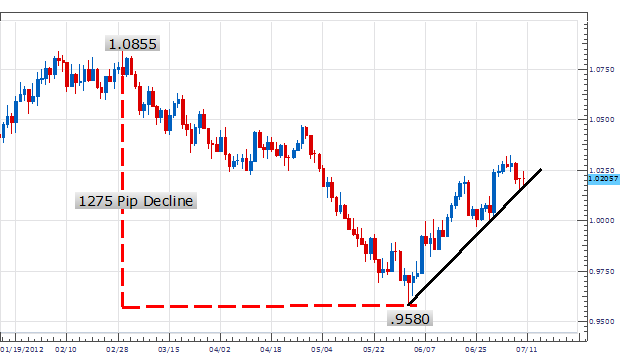 My preference is to set an entry to sell the AUDUSD under 1.0150. Stops should be placed above resistance near 1.0250. Using a minimum 1:2 Risk/Reward ratio primary limits can be set at .9950 or better.

Alternative scenarios include price bouncing off support to a higher high.