Trading the USDCAD through the first half of 2012 has been a difficult proposition for trend traders. The confusion began with price continuing a downtrend that had been in development since the formation of a high at 1.0657 on October 4th 2011. Price declined as much as 856 pips from this point through the current 2012 low residing at .9801 formed on April 30th. However, the possibility of a new trend has emerged, with the formation of the USDCADs first higher high with a break above parity at 1.0000.

A break above the parity psychological whole number has made many traders reconsidered the previous daily downtrend. Price has moved higher but is yet to test the 2011 high mentioned above. So which direction is a trader expected to place their orders? 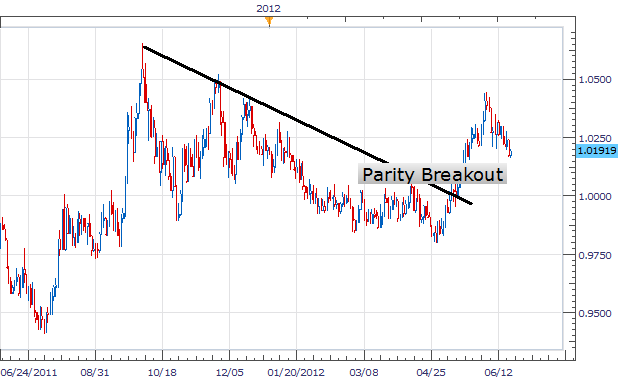 Moving in to a 4Hour chart we can look for technical clues to spot market momentum. Below we can see the development of a potential bullish pennant pattern. This pattern can be comprised of connecting our post breakout rise in price to a parallel declining pricing pattern. Currently this declining channel is formed by connecting the highs on June 3rd, 5th and 18th. Support is created by creating a parallel line connecting the wicks formed on the June 7th and June 10th lows. The pennant pattern is seen as a continuation pattern and will come to completion only upon a breakout to higher highs.

In the event of a breakout the pattern itself can be used as a price projection. Traders can measure the breakout from resistance to our current high. This distance can be used from the point of breakout to form a potential profit target. Using present price on the USDCAD this places a projection on the pair above 1.0540. 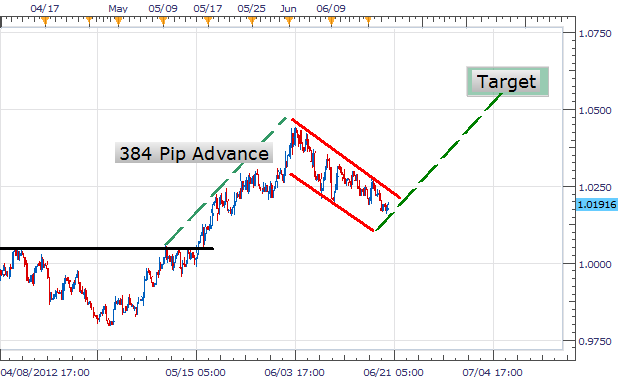