If you would like a full walkthrough of the Ichimoku system, you can view the previously published ‘Ichimoku Walk-Through,’ or the Ichimoku E-Book from the links below:

Much has been written about Yen weakness over the past 8 weeks, as the currency has seen a lack of strength that hasn’t been matched since the Fukushima disaster (no, not the disaster itself – the coordinated G7 intervention that took place thereafter).

Currency pairs such as GBPJPY, EURJPY, and AUDJPY have seen runs of over 1,000 pips in very short order; with so much strength that the Daily charts are exhibiting bullish posture on many ¥-based currency pairs.

But if you scale out to the weekly chart, some compelling setups become even more evident.

The GBPJPY weekly short shows recent resistance met at the top-side of Kumo, with a high price hit two weeks ago at 130.129.

Since, price has failed to make a new high on the daily chart, presenting a very aggressive risk-reward ratio on the trade.

I’m looking for a stop slightly above the high price hit two weeks ago, and looking to take profits all the way down to 120.00 if I can get there. The position will be managed by trailing the stop, with the first trail set to move the stop to breakeven after 100 pips has been generated. 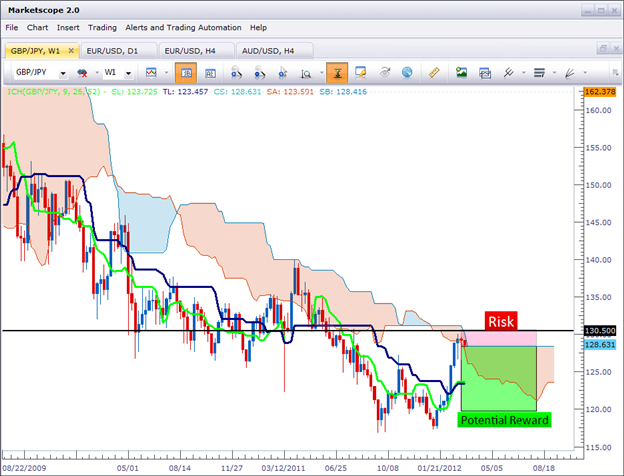 This setup highlights how indecisive markets have been in regards to risk on/off over the past 6 weeks. Since hitting 84 early in February, the Kiwi has continually attempted to make a new high. Unfortunately, any efforts were quickly rebuffed as the pair continued to range heavily until last week, when intermediate term support was broken.

However, price remained above Kumo on the Daily chart, as the uptrend has stayed in-tact, and this is during one of the more bullish periods of the US Dollar.

I like continued Kiwi strength, particularly in light of the current market price and the potential resistance that can be seen in US Dollars. 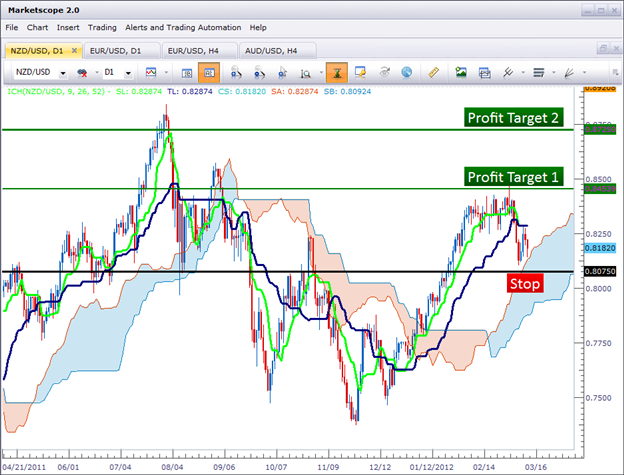