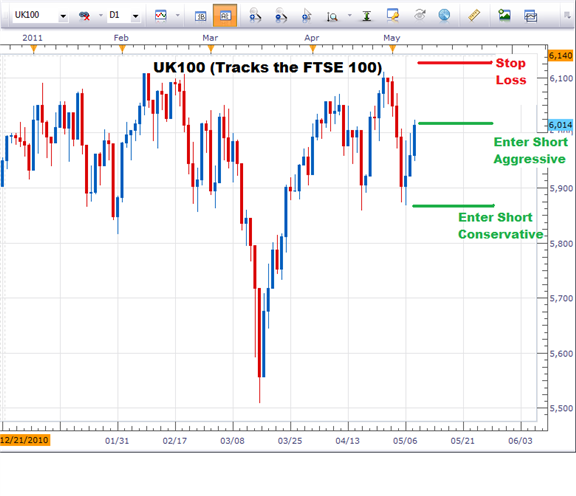 The US Stock market (SPX500) topped out at a price of 1376 on May 2, 2011(“Stocks Look Heavy”). It is down 1.5% since then, but other clues in the equities markets indicate additional selling may be on the horizon. This could provide some near term strength for the US Dollar as it bounces from support.

An aggressive trader could sell short the stock market with a stop above the highs. A more conservative trader would look for support trend lines to break, and then enter short on the broken line.

The South African Rand (ZAR) has been relatively weak in recent months even though the dollar was making all of the headlines. If the US Dollar gains legs and increases, look to match it up against a relatively weak currency so we are going to trade the USDZAR. 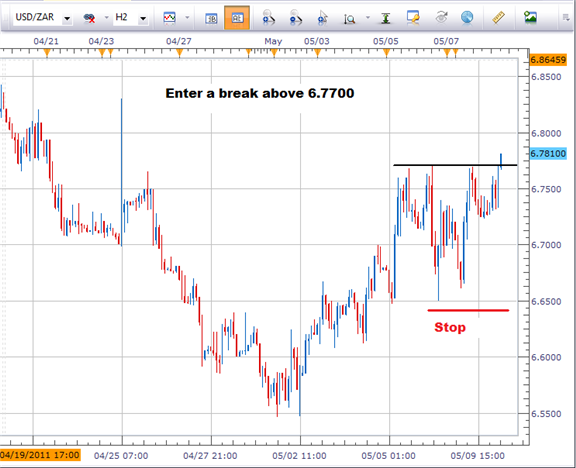 Our Clues from the Equities Market 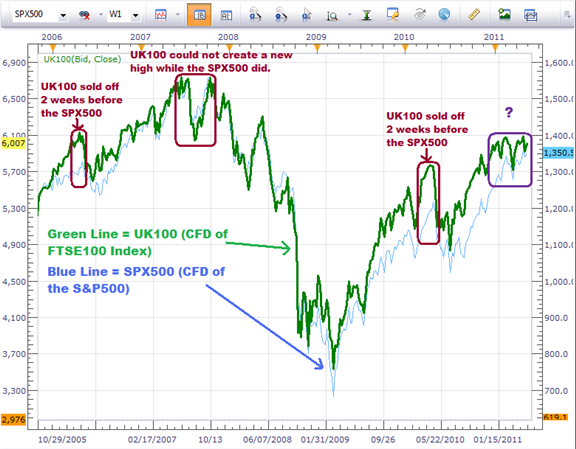 The high in 2007 showed intra-market divergence. That means one market continued to push higher (SPX500) while another market did not confirm the move (UK100). Intra-market divergence is a sign of weakness because only a small handful of the markets have the strength the push higher. A strong bull market tends to show all traders in a risk taking mode and all share indices tend to create higher highs and higher lows. As we see in 2007, not all indices participated in the move which indicates weakness which led to a substantial decline of prices.

Recently, the UK100 barely created a new high on April 27, 2011 by 3 points! Meanwhile, the SPX500 zoomed higher by 3%. This UK100 and the SPX500 relationship are showing signs of weakness in prices. Could the UK100’s inability to rally to higher highs signal a reversal to the downside? 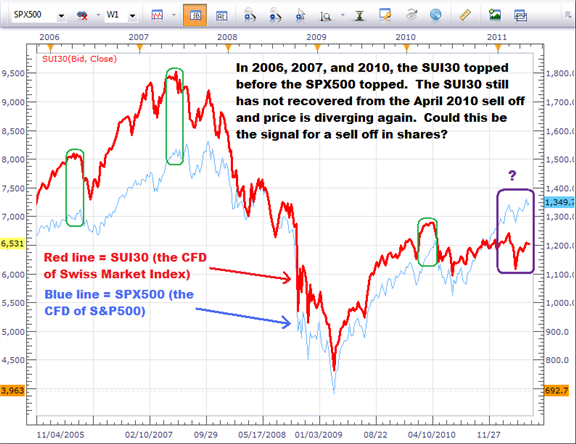 Another correlation appears with the SUI30 (Swiss Market Index). The SUI30 topped before the SPX500 in 2006, 2007, and 2010. In fact, the SUI30 is so weak that it has yet to push above its February 2011 highs or its April 2010 highs! Since the SUI30 has preceded previous SPX500 sell offs, could this recent intra-market divergence be a signal that prices may fall?

Why do these relationships exist?

It would make sense that European markets (or other indices around the world) may top out before US stocks. As money looks for safe places, US stocks tend offer more liquidity relative to other stock markets. Liquidity is important if you are managing billions of dollars…you want to be able to get into and out of your positions quickly without moving the market. It is the same liquidity that attracts traders to foreign exchange. The USD, CHF, and JPY may be the beneficiaries of a stock market sell off.