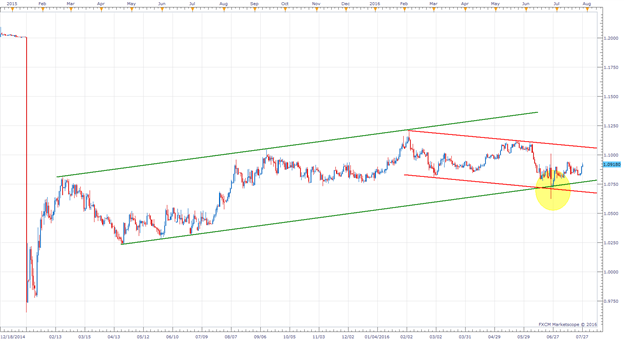 Will The EUR/CHF Seek The Upper Line Of Its Yearly Channel?

Interested in becoming a better trader? Check out the guide that DailyFX compiled from the traits that characterized the Most Successful Traders.

Yesterday’s movement in EUR/CHF represented the second best day the cross has seen so far in the month of July as the EUR gained 0.59% over CHF. Movement that is only behind the price action seen in July 12 when EUR/CHF gained 0.67%. Yesterday’s price action was mainly driven by the better than expected results of the German Ifo Business Climate Index.

As depicted above, we could observe that prices within this consolidation range recently bounced from support levels of the aforementioned ascending channel in the aftermath of the decision of the U.K. to leave the EU. Bounce that sets the cross in search for its channel resistance. 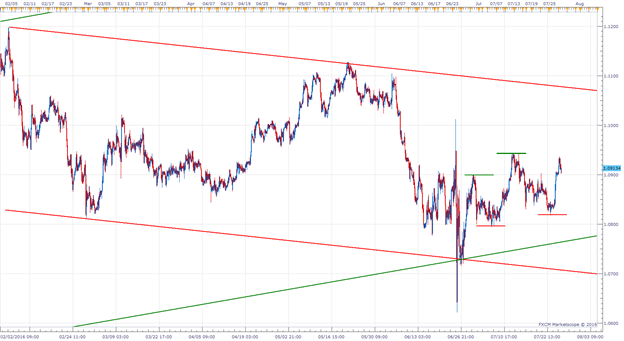 As observed in a shorter time frame chart, we could validate this upside momentum as EUR/CHF has now started to register a series of higher highs and higher lows.

Given that technical analysis shows that EUR/CHF seems to be respecting the ascending channel formed in 2015 and current price action seems to be validating it with momentum to the upside, further upside strength is expected.

In a contrary manner, if current price action starts to lose momentum and price fails to break July’s 12 high, attention should be directed to July’s 25 low. This given that if price breaks below the aforementioned level, it would invalidate any upside momentum and a retest of the multiyear support channel should be back on the attention of traders.