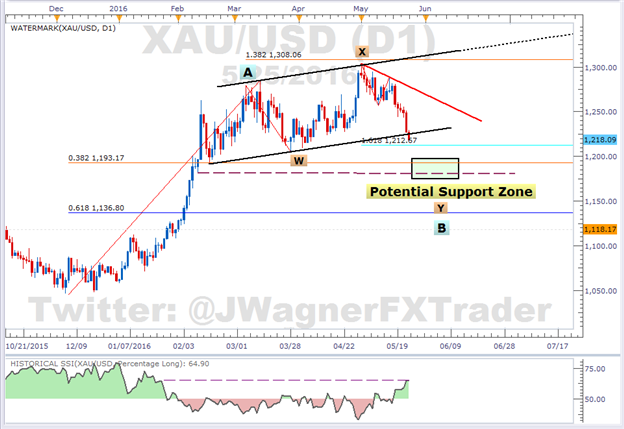 -Gold price on pace for 6 consecutive days of losses

Gold prices are poised to close down for the 6th day in a row and in 12 of the last 18 trading sessions. This is a result of Fed trying to open the minds of traders to a summer rate hike. On May 16, when gold was trading at $1273 per ounce, there was only a 4% chance of a rate hike in June. Now, those odds have increased to 38%

As you can see above, Gold price is currently trading in a sensitive nature to the Fed’s interest rate expectations. When the FOMC concluded their 2 day meeting on April 27 and announced they were doing nothing by holding rates steady, gold prices rocketed 3.8% in 3 days.

Once the Fed’s minutes from the April 27 meeting were released on May 18, gold prices have plummeted 4.5% round tripping the previous gains.

Therefore, keeping an eye on the interest rate expectations can help set the direction for gold prices.

From a technical perspective, it appears we are in a complex correction that began in early March. It is possible that prices could turn higher from current levels, but sentiment is too strong to initiate long positions. Ideally, we would like to see the bullish sentiment tone down.

For example, speculators have been piling into long positions according to the COT report. Additionally, Speculative Sentiment Index shows the largest ratio of longs to shorts since January 2016 (at the time of print, SSI is +1.86). It is possible we may see XAU/USD, a CFD which tracks gold, trade back down towards $1190 which would offer better risk to reward ratio opportunity.

The move lower in gold prices does appear to be more a function of a stronger dollar than on weak gold. The chart below illustrates gold priced in several currencies. You can see how gold is neutral or outperforming against 6 currencies.

Gold is relatively underperforming at the moment in GBP (orange line). This chart illustrates the yellow metal is hanging on but losing the race against the USD. You could be the 3rd fastest runner in the race, but still not win. 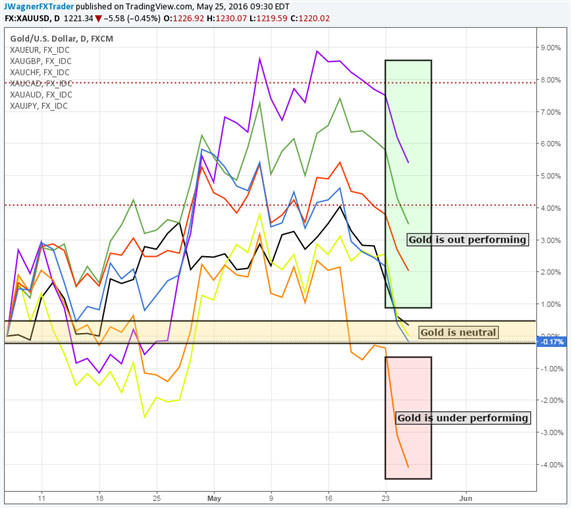 After a bout of shorter term weakness (priced in USD), we are looking to position to the bullish side longer term. However, we are awaiting lower levels to open the trade. Watch real trader positioning via SSI for a reading that is dropping to provide short term clues that perhaps the move lower is exhausted….ideally in the $1190 zone.

Additionally, wait for the red resistance trend line to break for a confirmation on a change in the mood of the market.