Gold prices are attempting to finish the week on its highs after struggling earlier this week. If gold prices finish today above $1238, then it will mark 5 weeks in a row of gains.

Since gold is priced in US Dollars, part of these gains are fueled by US Dollar losses. As Ilya Spivak notes in the quarterly forecast, Gold has a strong inverse correlation to Fed interest rate expectations. Expectations are falling in that market participants are not pricing in another rate hike for the Fed for the remainder of 2016. This is weighing on the US Dollar and naturally propping up gold prices. 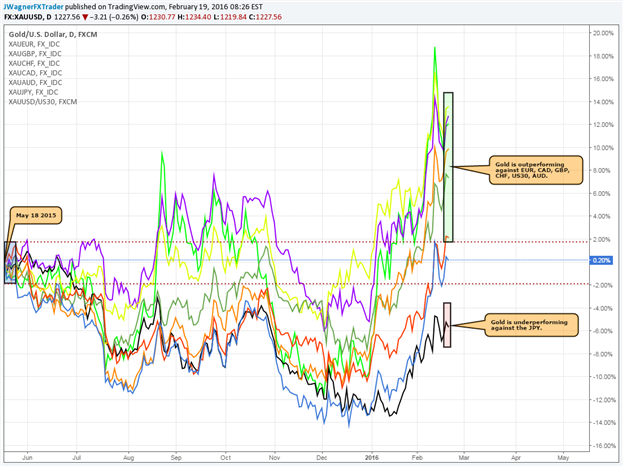 However, upon closer inspection, it’s not just a weak US Dollar supporting gold prices, gold is exerting some internal strength as well. In the chart above we have gold priced against 8 different markets. May 18, 2015 was the last significant high that we are testing now. By using comparative pricing since May 18, we can see that 6 of the 8 markets followed show Gold is outperforming.

This is a bullish sign and suggests gold prices are to be bought on dips.

Suggested Reading: 3 Steps to Buy the Dip or Sell the Rally

First, let’s look at what sentiment is indicating, then we will look at the technical patterns at play.

Though the number of long traders has increased 9.9% above levels seen last week, the number of short traders is still outpacing the longs as the SSI reading has dropped from +1.06 last week to -1.09 currently (click the link to see the current reading). This continued drop in SSI is supportive of a bullish stance and a buy the dip strategy. 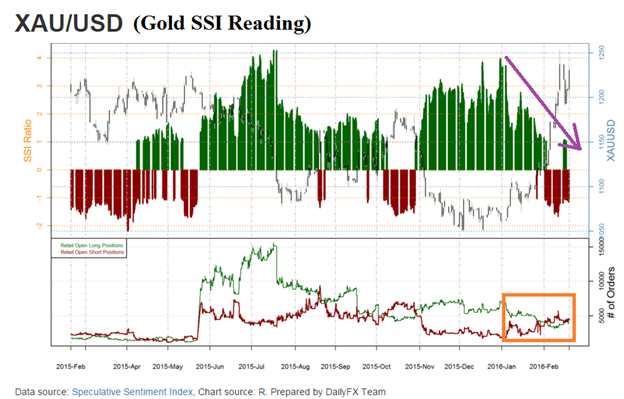 Gold’s powerful move to $1264 per ounce last week is indicative of a smaller degree wave 3. In Elliott Wave term’s wave 3 tends to be the longest and strongest. This wave may not be over yet, so we will look for dips to buy. 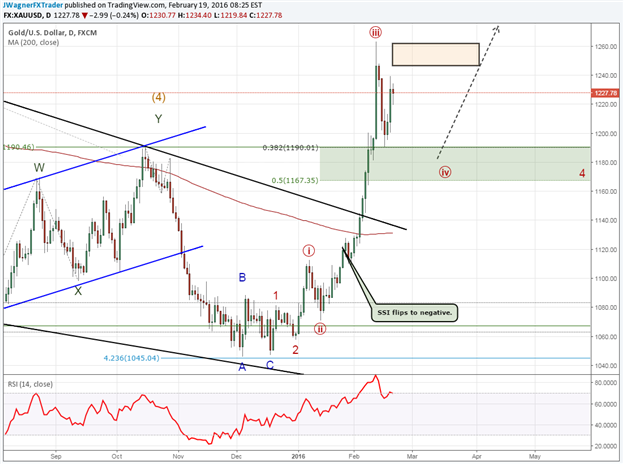 The way the chart is labeled above, we may be in the process of working on a circle wave ‘iv’ of 3. Generally speaking, fourth waves tend to have an alternating pattern with second waves. Therefore, wave 'ii' was sharp so we’ll anticipate circle wave ‘iv’ to be a flat or triangle pattern. As a result, the higher probability move is for another reaction to lower prices that we can use to establish a long position on.

You may hear traders say “don’t trade the first reaction” and the Elliott Wave model certainly fits into that mold. That is because corrective waves move in groups of three. So the first leg lower we saw last week suggests another leg lower of similar magnitude is coming in the next few days. Anywhere between the current level and $1291 could produce a rejection and secondary move lower. Therefore, the zone we’ll anticipate support to buy is $1167-$1190 per ounce.

If we materially push below the 200 day simple moving average near $1135 per ounce, then another pattern is in the works and we’ll need to reassess.

Due to broad based Gold strength, sentiment readings through SSI that are shrinking, and a bullish Elliott Wave pattern, we can seek out buying the dip strategy in anticipation of higher prices.

We found this one little tweak on risk to reward ratios increased the pool of traders who were profitable from 17% to 53%. Learn more about that tweak in pages 7-9 of the Traits of Successful Traders Guide [free registration].

Experience no re-quotes on your Gold trades. Learn more here (non-US residents only).